Adding more water to rivers, wetlands and streams at critical times can support California’s struggling native fish and birds. Regulation is one way to achieve this by requiring water users to leave a certain amount of water in the river course. A complementary method is water trading. Paying water users to provide water improves the environment while reducing conflicts over the allocation of scarce supplies. However, despite the promise of the deal, there are questions about the way forward.

Buying Environmental Water What is Buying – Who Pays?

Purchasing water to improve ecosystems (e-water) started in the 1980s and developed significantly in the 1990s (Figure 1). From 1984 to 2019, approximately 6 million acre feet (maf) of e-water were acquired, accounting for about a quarter of all purchases in the California water market. In today’s dollars, nearly $775 million went to the work, nearly half of which came from state and federal taxes and the rest from water surcharges. But e-water purchases peaked in the 2000s, and 2019 was lower than at any time since the late 1990s. 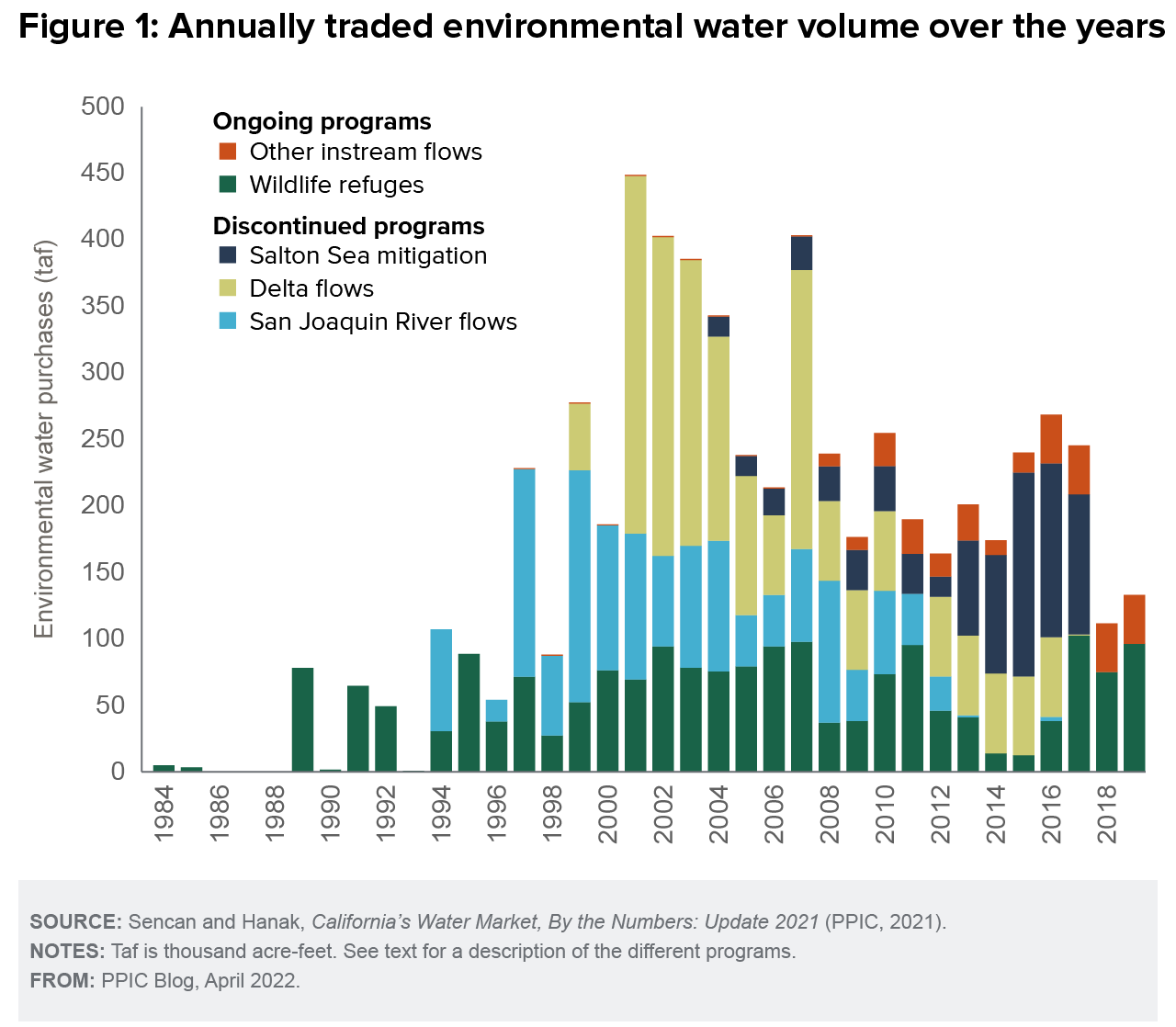 The decline reflects the expiration of several large projects (and associated funding):

Rebooting these e-water purchases could support important goals. A newly announced delta watershed cooperation agreement proposes transfers to improve fish conditions. Although not currently proposed, the transfer could help protect the habitat and public health of the Valley of the Kings.

A new model to enhance e-water?

Most state funding for e-water in the past came from water bonds, mainly for short-term (one-year) purchases. The designers of Proposition 1, a bond approved in 2014, tried something new, allocating $200 million to the Wildlife Conservation Board’s (WCB) Stream Enhancement Program (SFEP).

In spirit, SFEP aligns with a broad-based intrachannel approach (orange bars in Figure 1); applicants seek grants to directly increase mobility or program and learning opportunities. The program focuses on long-term (at least 20 years) or permanent improvements.

With 128 projects and nearly $135 million in awards to date, the data revealed some surprises (Figure 2). First, the acquisition of e-water—either alone or with land—represents a relatively small share of the incentive (14% of funding). Conversely, a majority (61%) support resource management projects that enhance flow in other ways, such as storage that alters the timing of flow, and urban conservation and restoration efforts to conserve water (e.g., clearing arundo—a thirsty, invasive river bank) plant). The remainder (25%) is used for planning and research. 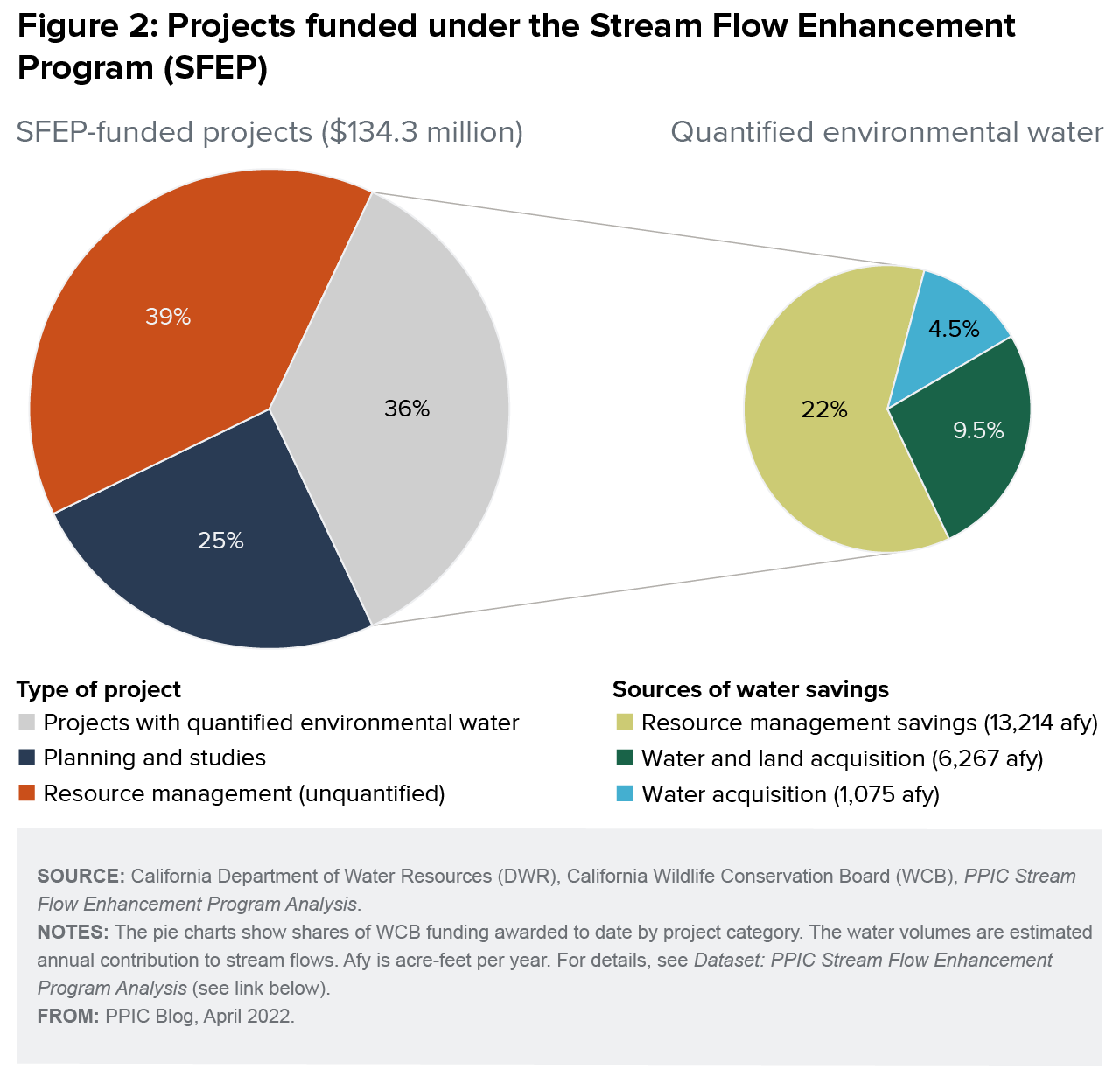 Stakeholders told us that the move to more flexible resource management solutions reflects the challenges of outright acquisition of e-water under SFEP. First, the Section 1707 permitting process to obtain Hanoi water rights is expensive and cumbersome—especially for small transfers. Second, many potential water sellers are just beginning to explore electronic water delivery and are not ready for permanent sales. In California’s water markets, permanent transfers are generally rare, so e-water marketing is no exception.

The water savings of some efforts (eg, arundo cleanup) are difficult to quantify. The WCB estimates that once completed, the e-water improvements will total about 21,000 feet per year, where savings can be quantified (Figure 2). Because these projects last at least 20 years, their unit cost is similar to the cost of purchasing e-water described above (Figure 1)—averaging $115 to $130 per acre-foot per year.

Looking to the future

The acquisition of water can help struggling ecosystems, and continued funding from water users and the state is key. Compared to past state funding for e-water, SFEP represents a significant and growing opportunity: It received $100 million from the General Fund last September and raised another $150 million this year. But the plan should spur more acquisitions, as options to increase the water cake through resource management actions are often limited. Some changes may help, including flexibility to allow short-term purchases and a simplified 1707 licensing process. Finally, in order to amplify impact, it is important to encourage larger projects as well as coordinated projects within the watershed. The Legislature and two major state agencies — the Wildlife Conservation Commission and the State Water Commission — should lead the effort.