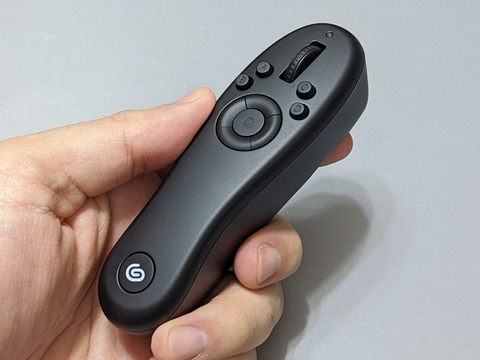 CELSYS’ “CLIP STUDIO TABMATE” is a Bluetooth device that can be combined with the company’s graphics software “CLIP STUDIO PAINT” (hereinafter referred to as “Crysta”) to simplify operations. Equipped with up to 12 buttons and scroll wheel, you can use the pen with one hand and perform various operations efficiently with the other.

This product is a Crysta-specific peripheral, but by using third-party software, it can be used with software other than Crysta, even if it is not supported. There are many attractive features such as comfortable hand feel and a large number of buttons for one-handed use, so there is no reason not to try it. Since I’m actually using it, I’ll cover the setup method and usability.

A Bluetooth device that can be used with one hand.Also equipped with wheels

This product is a Bluetooth device designed for left-handed operation. Due to the symmetrical design, the right hand can also be used, but since it is a device for assisting the operation with the empty hand when using the tablet, it is actually a product for the left hand only (unless you are left-handed)…

There are many button types. In addition to a wheel on top, it has four buttons below it and up/down/left/right + enter keys below it. In addition, two buttons are installed at the front of the fuselage, and a button equivalent to a trigger is installed at the bottom, so the number of buttons installed on this device is very large.

The connection to the PC is via Bluetooth. If you press and hold the button on the back of the host, the Bluetooth pairing mode will be set immediately after power on, so search and complete the pairing from the PC. By the way, it is detected on Windows by the name “TABMATE”.

When using this product with Crysta, all subsequent setup is done on the Crysta side. There is a dedicated menu in Crysta to assign shortcuts to this product, so you can assign any shortcut from there. However, various shortcut keys have been preset at the time of introduction, so you will use them at the same time.

In Crysta’s menu, there is a Quick Assign menu dedicated to this product.

Shortcut assignment screen. By default, functions such as undo and redo, rotation, brush resizing, and scaling are assigned.

If you use “JoyToKey”, it can be used with general software.

So what if I use it for something other than the main theme Crysta? This is shareware “JoyToKey” for Windows that allows you to assign various commands to the joystick. TABMATE is seen as a joystick when viewed from Windows, so you can assign any function with this software.

When you start JoyToKey, a list of buttons will be displayed. Whether each button of this product corresponds to “button ○” in this software can be known immediately because pressing the button will highlight the corresponding row.

“Key to Joy”. The license key is 770 yen.Any function can be assigned to each button of the joystick

Once you know the exact button number, you can assign various actions to it, such as keyboard shortcuts and mouse buttons. In the case of keyboard shortcuts, multiple input fields are arranged vertically, so register keys one by one, such as “Ctrl” and “C”.

Note that these are performed sequentially from the top of the input field, so actions may change depending on the key registration order. For example, in a web browser, the operation of “Return to Tab” is “Ctrl + Shift + Tab”, but if you pull Shift to the end, it becomes “Ctrl” + “Tab” + “Shift” registered, ” Ctrl” + “Shift” when two “Tab” are pressed at the same time, it will be mistaken for “forward” instead of “backward tab”, so you need to switch to the second one.

Also, scrolling the wheel up and down doesn’t work by default, so you need to specify the direction and amount of scrolling when the wheel is turned between “100” and “-100”. Whether the screen scrolls up or down when you roll the wheel depends on the operating system, but the software can specify whatever you want.

This is the screen for assigning keyboard shortcuts. Here, a combination of “Ctrl”, “Shift” and “Tab” is assigned.

The screen to which the mouse action is assigned. In addition to mouse clicks, pointer movements are also assigned on this screen, but some hints are required (described later).

Even the wheel does not move in its initial state, so the amount of rotation of the wheel and its direction needs to be specified.

After this assignment is completed, the left-hand operation can handle various shortcut keys. Compared to devices of the same type, the number of keys is greater and the assignment can be changed for each application. However, overly complex registrations can be confusing, so it is best to reduce registrations and increase them gradually.

By the way, the software won’t conflict with other mice connected at the same time, because it’s a mechanism to register shortcuts for each device (in this case, the product). For example, shortcuts registered for wheel clicks do not affect mouse wheel clicks. Software that assigns shortcuts to the mouse may force all devices to use the same shortcuts, so this specification is appreciated.

No dedicated gimmick for moving the mouse pointer

By the way, this product has some caveats when used with general software. It doesn’t have dedicated gimmicks for moving the mouse pointer, like a trackball or trackpoint.

For the time being, if you assign operations to the up/down/left/right arrow keys in the center of the product body, you can move the pointer horizontally and vertically, but the moving distance button is fixed each time you press the button, which is not practical because it cannot. Move diagonally.

So, for example, if you want to move to the previous or next tab or scroll down to read an article with lots of tabs open in a web browser, you can use this product alone to move or scroll the tabs. , it’s almost a waste if there’s a “go to next page” link after that.

With this arrow key, you can barely move the pointer horizontally and vertically, but only a fixed distance.Most importantly, it is impossible to move diagonally

Details screen. This moves the pointer left to the left button on the directional pad, but it just simulates it.

This is simply because this product is not supposed to be used alone, but rather a device that assists the operation. The aforementioned “Relacon” is a device for operating a PC in a comfortable position (like lying down), so it’s designed to do everything that can be done with a mouse.

However, since this product is a device that improves operational efficiency, while holding a mouse or pen in the right hand, it cannot perform all operations that can be done with a mouse. Although they look and use very similar, the design philosophy is completely different.

Therefore, when using the above web browsers, this product does tab switching and scrolling up/down, but the mouse pointer moves with the mouse. It was originally used for support, so be sure to firmly understand that it is a product with such a concept before introducing it.

Simplified operations at the 5,000 yen level

As mentioned above, although the operations that can be performed are partially limited, it is quite an excellent tool as an auxiliary operation. Even if the mouse doesn’t have extension buttons and you can’t assign keyboard shortcuts, you can use it with this product to perform a variety of things as well as a multi-button mouse.

While this product is the way it is, the only difficulty I feel when actually using it is the behavior of the power button. This product will automatically shut down if it is not operated for more than 20 minutes, but after that, you must press and hold the power button to turn it on.

Power button. Press and hold to turn it on.Specifications to turn on pairing mode every time you turn it on

As you can see by actually trying it, it’s annoying. It would be nice if the button was at least swipe-like, but if you hold it down for a while, you’ll have to wait a while, so getting started is delayed by a speed. This annoyance is the same even if the software used is Crysta, so if a successor model emerges, I hope you reconsider this behavior.

There’s a lot to do, but the actual price is reasonable at around 5,000 yen, so it’s perfect for a casual demo. The usage introduced this time is unofficial, so it will not be supported (reminder), but the click feels good, and the quality of the body molding is also high. If you want to be more productive with your free left hand, this device is definitely worth checking out.