The Ministry of Foreign Affairs website uses “JavaScript”.
Please turn on “JavaScript” to use. 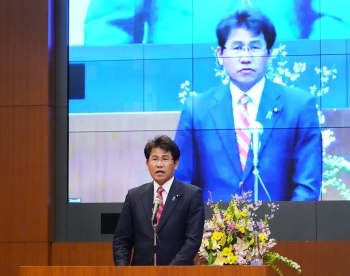 Moderator: Ueda Eden, General Manager of International Department of Japan Wind Power Association
Speaker Mitsuhiro Nishida Director, Office of Strategic Planning, Bureau of Natural Resources and Energy
Theme (1) “The Sixth Basic Energy Plan”
Initially, in terms of the situation in Ukraine, Japan’s energy self-sufficiency ratio to Russia was above 10%, the lowest level among OECD members, but Japan will continue to keep pace with G7 countries in imposing sanctions on Russia. There is an explanation and we will respond . In addition, although Japan is said to have delayed the introduction of renewable energy, it is said that solar power generation is one of the highest in the world, and about 6 GW of offshore wind power will be introduced in the future. 2030. It was explained that their goal was, and it was suggested, that laws be enacted on the use of sea areas for this purpose. He also explained that building a hydrogen supply chain is key to achieving the 2050 carbon neutrality goal.

Speaker Etsuki Ueda General Manager, International Department, Japan Wind Power Association
“Recent Business Exchange Meeting”
Regarding the efforts of the Japan Wind Power Association, Japanese companies have high technical capabilities in offshore wind power, but they have little experience and can learn from the experience of foreign companies. Introduce cases where the needs of both parties are connected and the successful connection is made. In recent years, attention has been increasing in the field of offshore wind power, and we have been implementing measures such as dispatching study groups to Europe, holding seminars, and explaining that cooperation with overseas companies is progressing.

C. Speaker Hideki Endo, Director and General Manager of Power Energy System Project Department, Chiyoda Corporation
Theme (3) “Hydrogen Production and Hydrogen Supply Chain Using Renewable Energy”
Offshore wind power is one of the solutions to use the surplus electricity and water of offshore wind power as a stable supply, while stating that the power supply area and the demand area are different, depending on the weather conditions. Hydrogen Transfer and Storage Technology (SPERA), and presented Chiyoda’s operations in Brunei and Kawasaki. He also mentioned the high cost of the hydrogen supply chain and the importance of suppliers’ efforts to reduce costs and incentives introduced early by the government.

Katsuro Nagai, Deputy Director General of the Cabinet Office Secretariat (Responsible for Economic and Financial Management) and Director of the Japan Foreign Direct Investment Promotion Office
So far, economic and social activity has been hampered by the corona disaster, but he said he hopes to change that by revitalizing direct investment in Japan, including in the renewable energy sector. In addition, Japan exists as an attractive market and attracts foreign companies and foreign investors to achieve the goal of doubling Japan’s direct investment balance to 80 trillion yen by 2030, or 12% of GDP. The business environment, the attraction strategy that leverages regional advantages, and the matching of foreign companies with local companies, the government will continue to make firm responses through institutional reforms and budgetary measures.