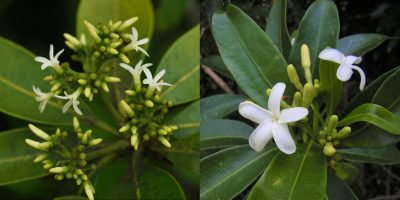 1.background
It is also known as an “evolutionary experiment ground” because of the many endemic species that can only be seen on ocean islands around the world, and has fascinated many people since ancient times. The Ogasawara Islands are no exception, with 125 species, or about 45% of the 280 species of vascular plants that grow naturally, considered endemic. As the geographical origin of the endemic plants of the Ogasawara Islands, 3 routes are assumed, mainly Japanese native elements, Oceania elements and Southeast Asian elements. However, it is not clear where these ancestral species came from or when they reached the Ogasawara Islands and evolved into endemic species. In this study, as part of elucidating the origin of plants endemic to the Ogasawara Islands, we focused on two endemic species of the Oleander family, Yarod and Hosobaya Road.
Yalord grows widely in the forests of the Ogasawara Islands (including Satoshi, Father, and Hahajima Islands), while Hosobaya Road is limited to North Iwo Jima and South Iwo Jima (including North Iwo Jima, Iwo Jima, and South Iwo Jima) of the volcanic archipelago. It grows in its original place. It is speculated that the two species have different origins because of the shape of their leaves and fruits and the size of their flowers. However, the genus Yarod, which includes these species, is widely distributed from the Indian Ocean archipelago to tropical Asia to the Pacific islands, and comprehensive DNA comparisons with closely related species including the surrounding areas have not yet been performed. In addition, Tiny Valley Road is a plant, and since it only grows on North and South Iwo Jima in the volcanic archipelago, it is difficult to even collect samples for DNA analysis.

Fig. 1 The Yalord and Hosobaya Roads growing in the Ogasawara Islands were formed by different common ancestors.

3. 3. Spillover, future plans
This study shows that the two endemic Yarod species that grow on the Ogasawara Islands formed from completely different ancestral species. Through a comprehensive analysis including the surrounding area, it was found that the species group thought to have formed from a single ancestral species of the Ogasawara Islands actually originated from different ancestral species.
About 1 to 2 million years ago, two endemic species of the Ogasawara Islands, Yarod, parted ways with related species. The Ogasawara Islands where Yalord grows are thought to be tens of millions of years old, so this value can be interpreted as being consistent with geological history. On the other hand, the volcanic archipelago where Tiny Valley Road is currently located is estimated to be only tens to hundreds of thousands of years old. In other words, the divergence time of the small valley road was earlier than the time when the islands were formed. In addition to estimation errors, the most closely related strains may not have been analyzed or have become extinct, which is why the divergence of endemic species predates the date of island establishment. .. From now on, it will be necessary to conduct a large-scale survey of the Mariana Islands, centering on Mariana Road, a close relative of the tiny Vallelu, to verify which possibility is appropriate.
The Ogasawara Islands have a unique ecosystem that is unprecedented in the world and is registered as a World Natural Heritage. On the other hand, the protection of natural ecosystems is also a major issue for the Ogasawara Islands. By elucidating the history and evolutionary processes of the plant species that make up the forest, it is expected that an in-depth understanding of how the unique ecosystem of the Ogasawara Islands is formed will add to the enormous vitality of conservation.

<研究人员的评论>
During my field trips to the Volcanic Islands and Guam, I realized that Hosobaya Road and Mariana Road are two. At this point, as previously pointed out, I am halfway convinced that the two species of the Yarod genus of Ogasawara have different origins. I am excited to demonstrate this through molecular phylogenetic analysis. I hope to continue to fully elucidate the origin of species endemic to the Ogasawara Islands through enhanced collaboration with researchers in the surrounding area. (Koji Takayama)