The results of this study are expected to help understand the plant’s immune system and develop techniques for controlling disease resistance.

Salicylic acid, known as an NSAID, is an endogenous signaling molecule that enhances disease resistance in plants. However, the mechanism by which salicylic acid transmits signals in plant cells remains unclear.

This time, the International Collaborative Research Group has added a new compound library.[2]We have identified three oxicam-based NSAIDs (tenoxicam, meloxicam, and piroxicam) that are similar in chemical structure to compounds that inhibit plant immune responses. In addition, we found that tenoxicam tilted the intracellular redox state to the oxidative side and broadly inhibited the gene cluster with increased expression of salicylic acid, elucidating part of the signal transduction mechanism of salicylic acid.

This research is based on the online scientific journal “Nature Communications‘ (December 15) will be published. 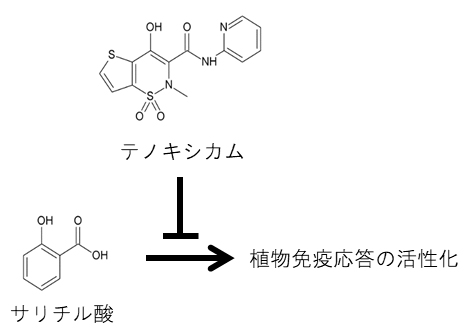 When a plant recognizes the infectious behavior of a pathogen, it induces a biodefense response to prevent the infection and growth of the pathogen. This defense system is called “plant immunity” because of its many similarities to the innate immune system of animal cells.

Salicylic acid, known as a human non-steroidal anti-inflammatory drug, has been used for over 2,000 years as an antipyretic analgesic derived from willow bark. On the other hand, in plants, salicylic acid is an endogenous signaling molecule and a transcriptional cofactor.[3]It has the function of activating plant immune responses through NPR1. However, the role of NPR1 in salicylic acid-dependent signaling remains unclear. If compounds that interfere with this signaling pathway can be identified, it could serve as a key to advancing the understanding of plant immune systems and developing technologies to control disease resistance in crops.

In 2012, an international collaborative research team added drugs and a pathogenic bacteria (patella variegata) to suspension culture cells of the model plant Arabidopsis thaliana.[4]), a high-throughput assay that quantitatively tests programmed cell death, one of the resistance responses exhibited by cultured cells.[5]developedNote 1).

This assay system is used to search for bioactive substances that disrupt plant immune responses from a compound library of approximately 2,800 small molecule compounds. The selected compounds and foliar fungi were then inoculated into the plants to study the effect on bacterial growth. Therefore, we identified three NSAIDs, the oxicam compounds (tenoxicam, meloxicam, and piroxicam), that promote bacterial growth and suppress plant immune responses (Figure 1). 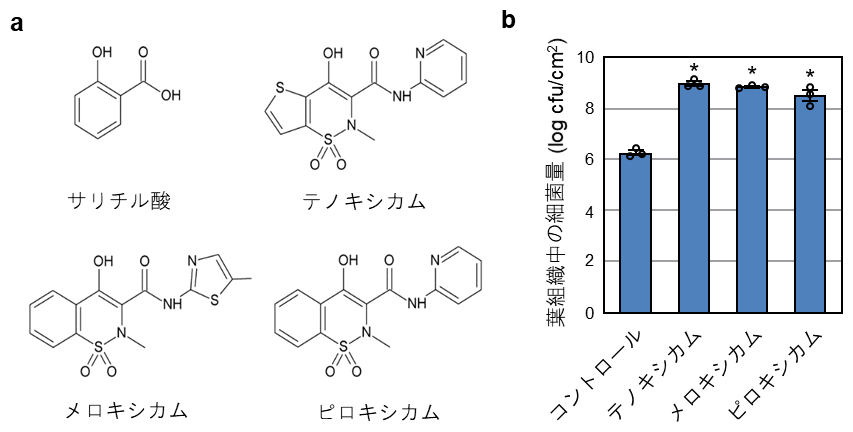 Indicates a statistically significant difference compared to the control. The oxicam compound increases the growth of pathogenic bacteria. 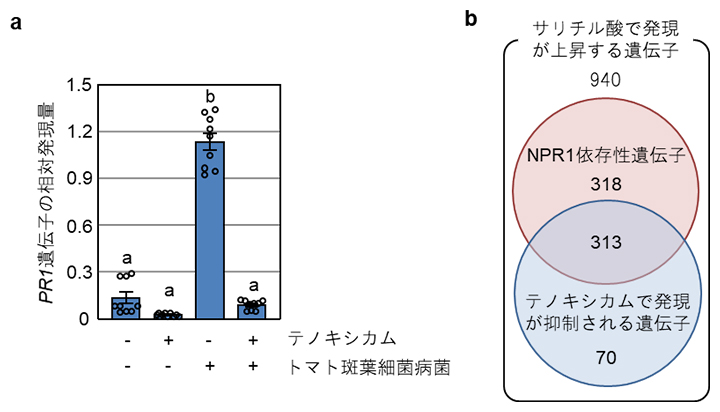 The expression level of this gene was found to be reduced.

[6]The intracellular redox state of plants was temporarily tilted to the oxidized side after salicylic acid treatment, and then significantly shifted to the reducing side. At this time, glutathione, the main antioxidant component in cells,

The effect of tenoxicam on the amount of intracellular glutathione

Wild-type Arabidopsis was treated with salicylic acid and/or tenoxicam, and total intracellular glutathione levels were measured 1 day later. The addition of tenoxicam was found to inhibit the increase in total glutathione amount in response to salicylic acid treatment. NT stands for unhandled control.Asterisk

Wild-type Arabidopsis was treated with salicylic acid and/or tenoxicam and the ratio of reduced to oxidized forms of intracellular glutathione was examined after 1 day. The addition of tenoxicam was found to inhibit the increase in the ratio of reduced glutathione in response to salicylic acid treatment.[7]
[8]NPR1 is a protein that contains a large number of cysteine ​​residues that form disulfide bonds depending on the redox state within the cell. 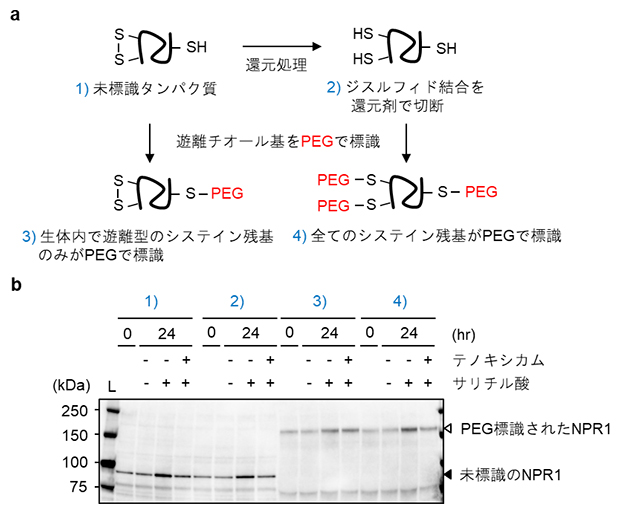 It was investigated in detail using the labelled method (Fig. 4a). It was found that the cysteine ​​residue in NPR1 was always in the reduced form with or without salicylic acid or tenoxicam treatment (Fig. 4b). Therefore, the effect of tenoxicam is not related to the redox state of cysteine ​​residues in NPR1.

Arabidopsis thaliana expressing the fusion protein of green fluorescent protein and NPR1 was treated with salicylic acid and/or tenoxicam, and the protein was extracted from plant tissue 1 day later. The labeled samples were prepared according to the protocol of (a). After separation by SDS-PAGE gel, NPR1 protein was detected using anti-NPR1 antibody. The mobility of PEG-labeled NPR1 in the gel was constant with or without salicylic acid or tenoxicam treatment, indicating that the cysteine ​​residues in NPR1 are always in reduced form.

The NSAIDs salicylic acid and tenoxicam are both human cyclooxygenases.[10]Although they show antipyretic and analgesic effects, this study shows that they have opposite positive and negative effects on plant immunity, respectively. Since plants do not have cyclooxygenase, tenoxicam is expected to target different proteins in plants than in humans. In the future, by identifying the targets of tenoxicam, we are expected to discover new targets of salicylic acid or new components of salicylic acid signal transduction.[11]In addition, the phytoimmunosuppressive effect of tenoxicam is Agrobacterium.

Efficiency of gene transfer into plants can be improved through legal, genome editing[12]It is expected to accelerate the development of functional crops.

The results of this research are the 17 “Sustainable Development Goals (SDGs)” announced by the United Nations in 2016.

It can be expected to make a great contribution to “2. Zero Hunger” and “15. Protecting the Land of Abundance”.

International goals for the period 2016 to 2030 are set out in the 2030 Agenda for Sustainable Development, adopted at the United Nations summit in September 2015. In a sustainable world composed of 17 goals and 169 goals, not only developing countries, but also developed countries themselves are working hard, and Japan is also actively working hard. This is a common thing. (Reproduced from the website of the Ministry of Foreign Affairs, with minor modifications)

Professor (at the time of research) He Shengyang

Noh Yoshiki
according to