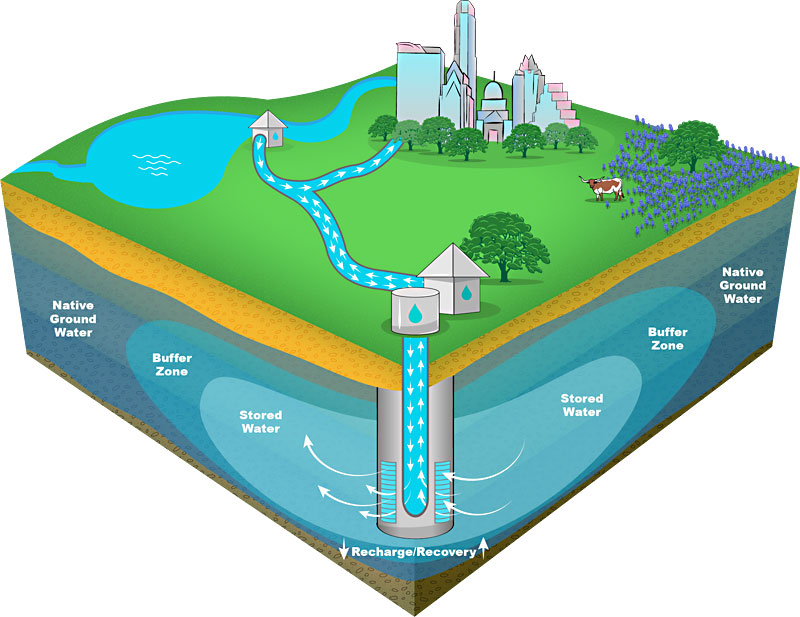 After the third boil water notice in four years was issued in February, Austinites are considering how to keep drinking water on hand in case the water supply proves unreliable again. A plan like this – Aquifer Storage and Recovery Project (ASR) – have been working Austin water Created since 2018 water forward plan, an outline of a 100-year conservation and reuse strategy for the next 100 years in response to the 2008-16 drought that reduced upland lakes to record lows. On March 24, the AW held the first of many planned town halls related to ASR that should store enough treated water in a nearby aquifer by 2035 to prevent a recurrence Significantly increases available supply during drought or freezing.

ASR essentially captures rainwater for storage in the ground when it’s plentiful, and withdraws it in times of drought or other emergencies — much like what AW describes as a water-saving account.Program leader explains that the ASR program that has proven successful in Kerrville, El Paso and San Antonio has many benefits Christy Shaw: “Storing water underground in natural aquifers prevents the high evaporative losses that reservoirs experience in warm climates, and is more cost-effective than other similarly sized storage options.” To protect the health of aquifers, water will be pumped before Processed before entering and then again when withdrawing to ensure it is compatible with existing supply.This Carrizo-Wilcox and Trinity The aquifer has been identified as a contender for the project, and a location will be finalized in 2023 following a geological survey, “based not only on aquifer considerations, but also on endangered species, regulatory concerns and proximity to integration with the Austin Water system,” Xiao said.

AW will pilot a small-scale version of the ASR from 2024 to 2027, with the design and construction of a full-scale version beginning in 2028, with an expected end date of 2035. According to the Water Forward Plan, the aquifer will include 60,000 acre-feet of storage space by 2040. “For context,” the project manager noted Helen Gerlach“The entire city of Austin used approximately 160,000 acre-feet throughout 2021. By the end of the century, this will expand to as much as 90,000 acre-feet per year by 2115.”

By 2040, Austin could be storing large amounts of treated water in an underground aquifer.

Those listening to the session had several questions, mostly related to who can claim water rights: groundwater reserve, to manage groundwater, and the AW responded that if their chosen location was within the GCD, they would “share information…and work with them”. Another asked if pumping would affect nearby farming and ranching operations – “I depend on my wells for my livelihood, [when] major surgery [is] Pump the water, and my well falls. The AW promises that the ASR “will never pump more water than is stored in the aquifer… We will never pump groundwater that already exists.” [there].” Treated stormwater for ASR is also subject to capture rule, which in Texas means landowners can harvest any water beneath their land, regardless of the impact on nearby wells or aquifers. AW says this is a “key consideration and when we identify locations we will look at different strategies to ensure we can protect our water resources” such as buying land above aquifers and renting it out to farmers and ranches host.

JetkeAW’s discussion moderator clarified that “we are still in the early stages” and promised that AW will “work with the community throughout the process to share updates and gather feedback.” “I think the idea of ​​reusing water sounds great. But sometimes the devil is in the details,” said listeners with pumping questions before Zoom broke into panels.

Have something to say?This chronicle Comments from the community on any topic are welcome. Submit yours now at austinchronicle.com/opinion.