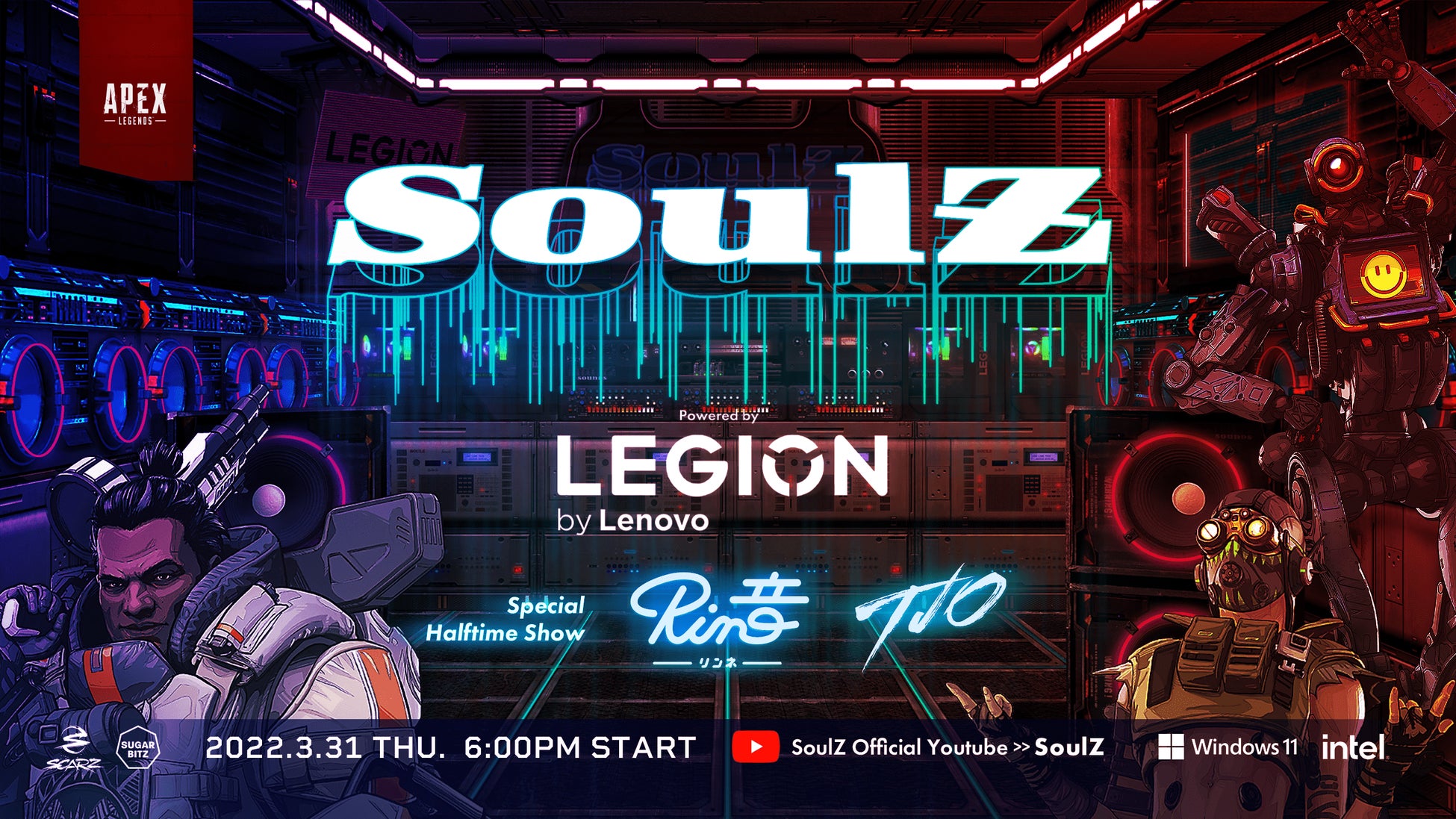 On the day of the event, a total of 20 teams from overseas professional teams, Japanese professional teams and anchor teams will compete for the winning prize.
In addition, on the halftime show, as a special guest, a veritable new generation of rappers.

Top-notch popularity in JapanRin soundAlso, in addition to club parties all over Japan centered on Tokyo, there are popular DJs who appear at many large festivals around the world such as ULTRA MUSIC FESTIVALTJOWill appear. We plan to present performances that can only be experienced here. 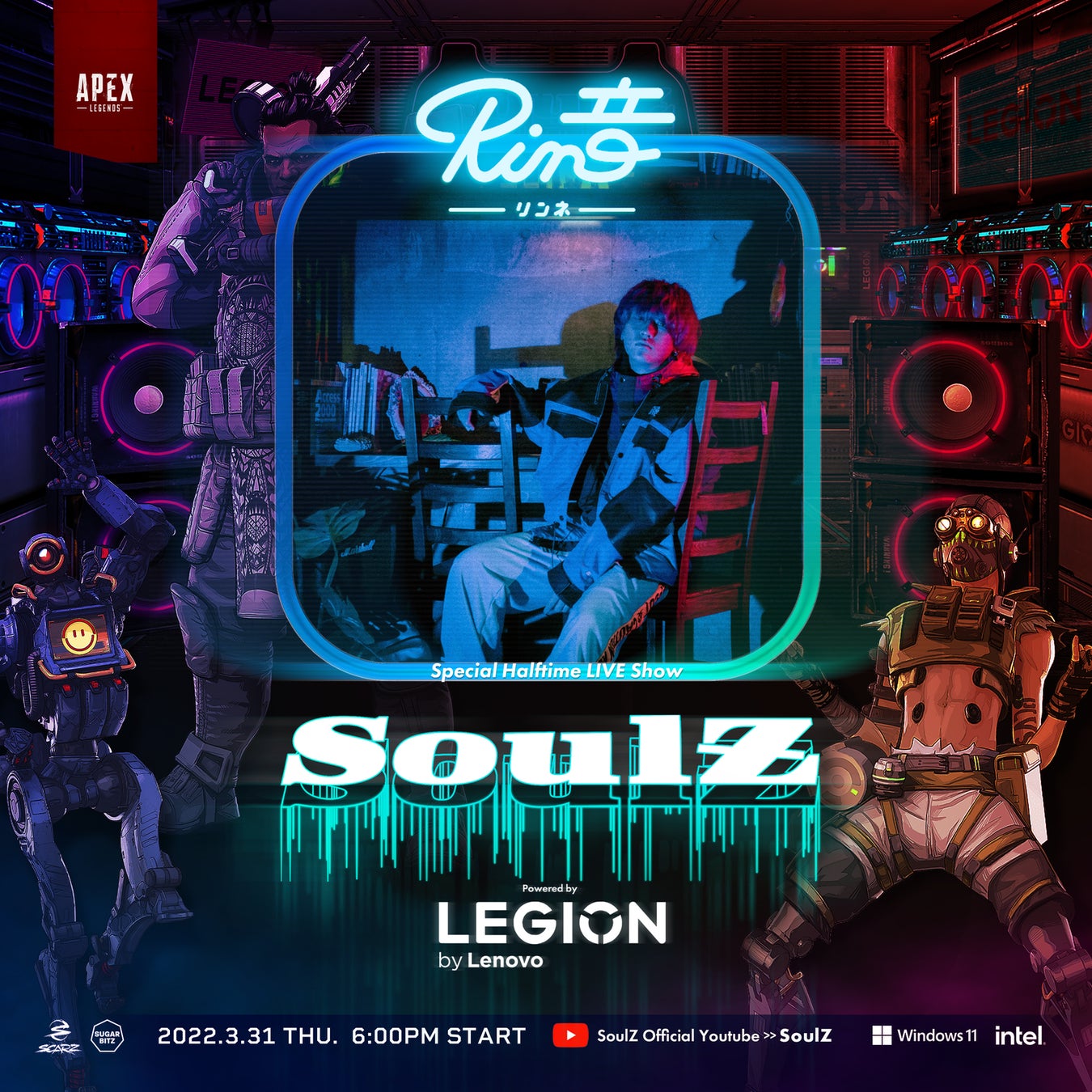 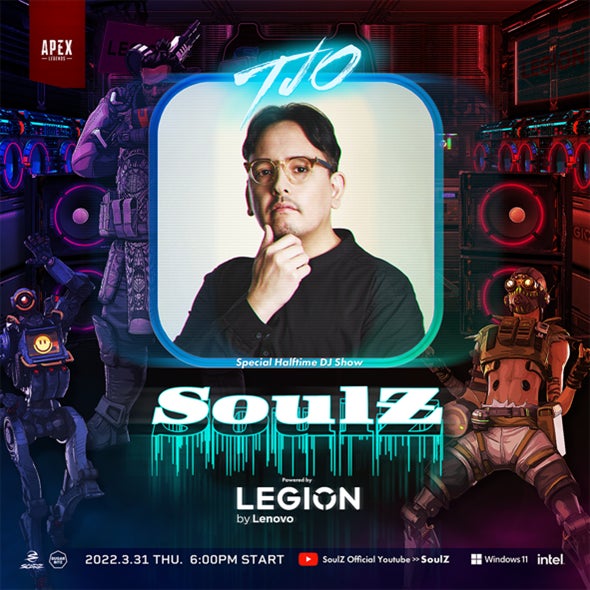 Gamers are fully invited and anyone can watch it absolutely free. 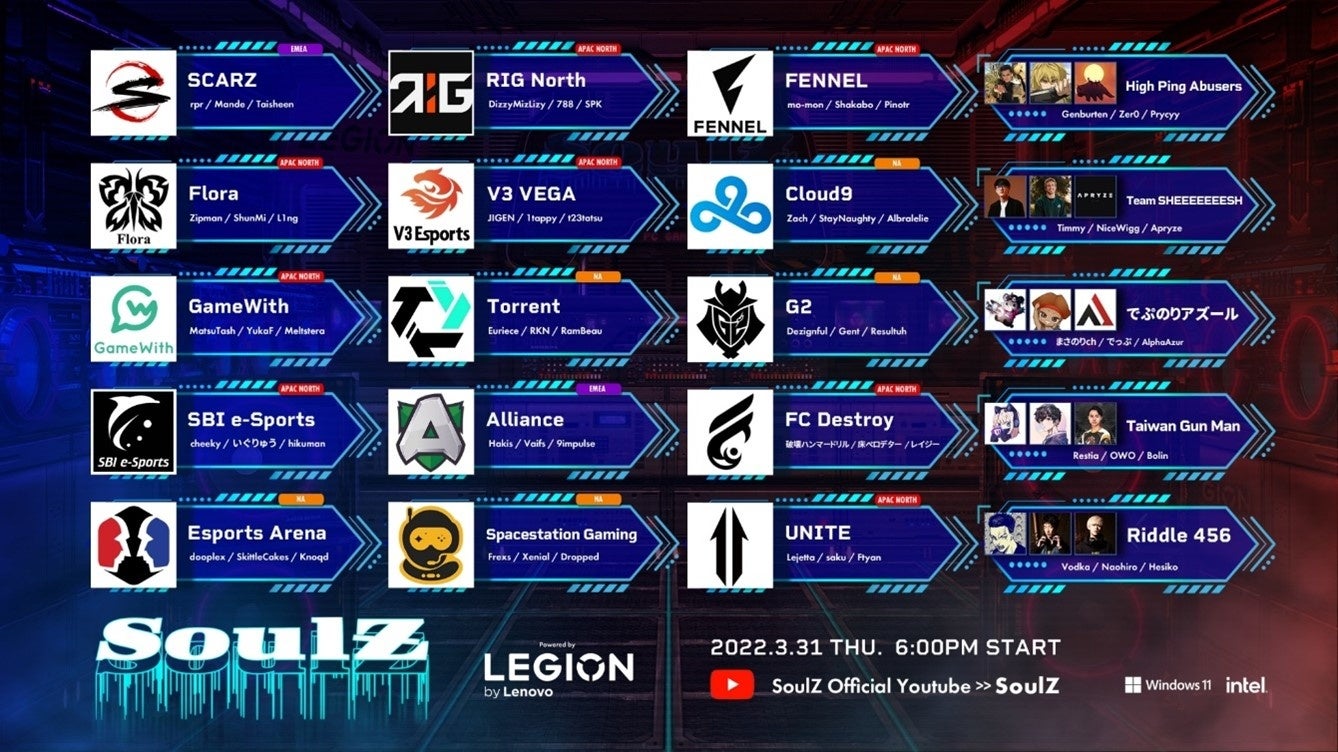 The participating teams are announced on SoulZ’s official Twitter (@SoulZ_jp).
Top overseas teams from Europe, Middle East and Africa gathered “SCARZ” and “Alliance”, “Esports Arena” and “Torrent” from North America, and “Cloud9”, “G2” and “Spacestation Gaming”. In addition, the team from APAC NORTH also decided to participate in the “ALGS

: Split 2 Playoffs”, respectively called “GameWith”, “FENNEL”, “Team UNITE”, “V3 VEGA” and “FC Destroy”. Line up. The anchor team with both popularity and ability is also organized, and it is very important for future conferences. There are high expectations for what kind of performance will develop. On SNS, “The real ALGS is about to begin! ‘ and ‘Postseason Outpost’ has gotten people’s attention. 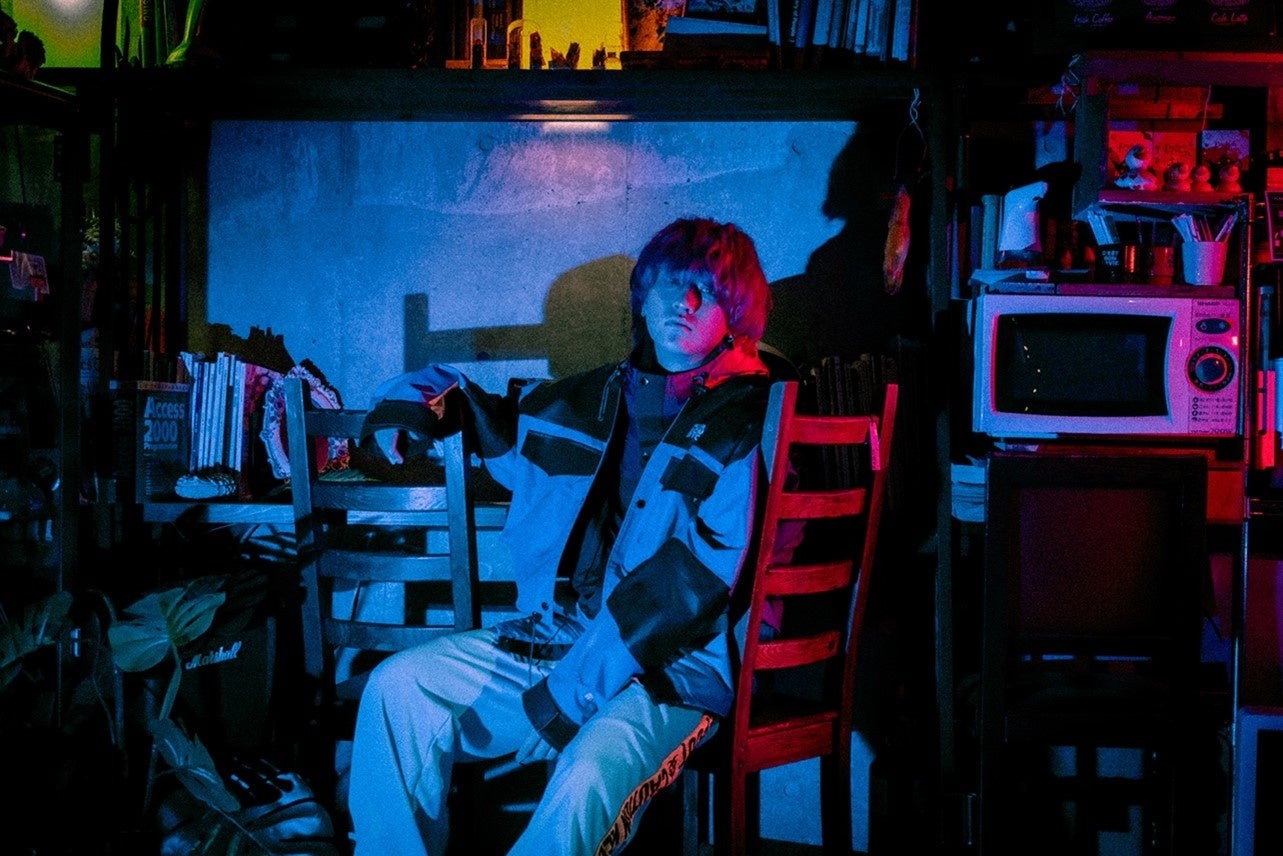 [凛音]
Rapper born in Sogata City, Fukuoka Prefecture in 1998.
Released in February 2020, “snow jam” has risen to #1 on Spotify’s domestic viral rankings and #9 overall on Apple Music, with over 250 million total streams.
Won the “Rookie Award” at the “62nd Shining! Japan Record Awards”. 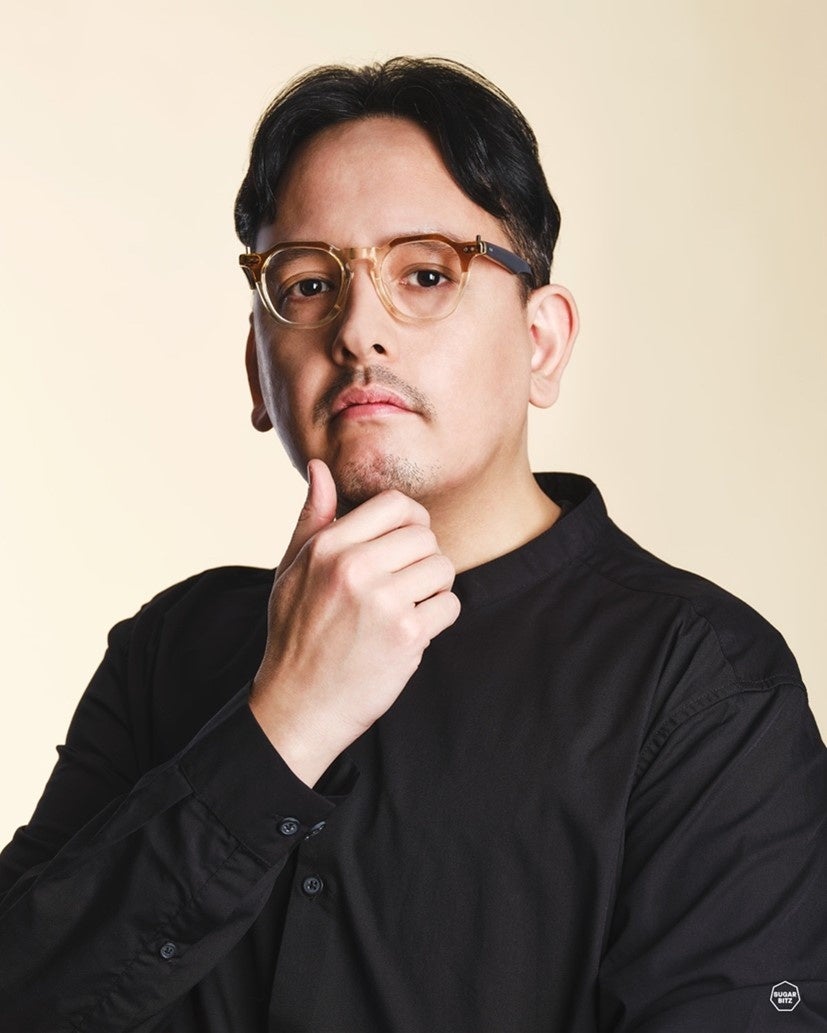 An open-format DJ who plays the genre endlessly and is a top curator in Japan. Born in Paris, he is of Japanese, British and Thai descent.
Besides club parties all over Japan, mainly in Tokyo, he has performed at many large festivals around the world.

Among the works of DJ MIX, the realization of the first Japanese MIX CD released by the world’s top dance music label “ULTRA MUSIC” shocked the scene.
A popular radio personality, he has been a regular on block.fm for years, including appearances on every major station.
Additionally, his Instagram Story, also known as the “TJO Channel”, is as popular as the medium and offers a wealth of content from Spotify playlists, music intros, seasonal miscellaneous news topics, and audience Q&As. . I am sending.
As a music producer, he also provides music for various artists in Japan and overseas.

In recent years, he has been appointed as the director of the new label “SoulZ Sounds” born from the e-sports entertainment project “SoulZ”. He teamed up with British producer Sigala on the hit “You For Me SoulZ Remix” with Rita Ora.
Talented bilingual DJ.

It has received great support from many media and a wide audience.
Official website 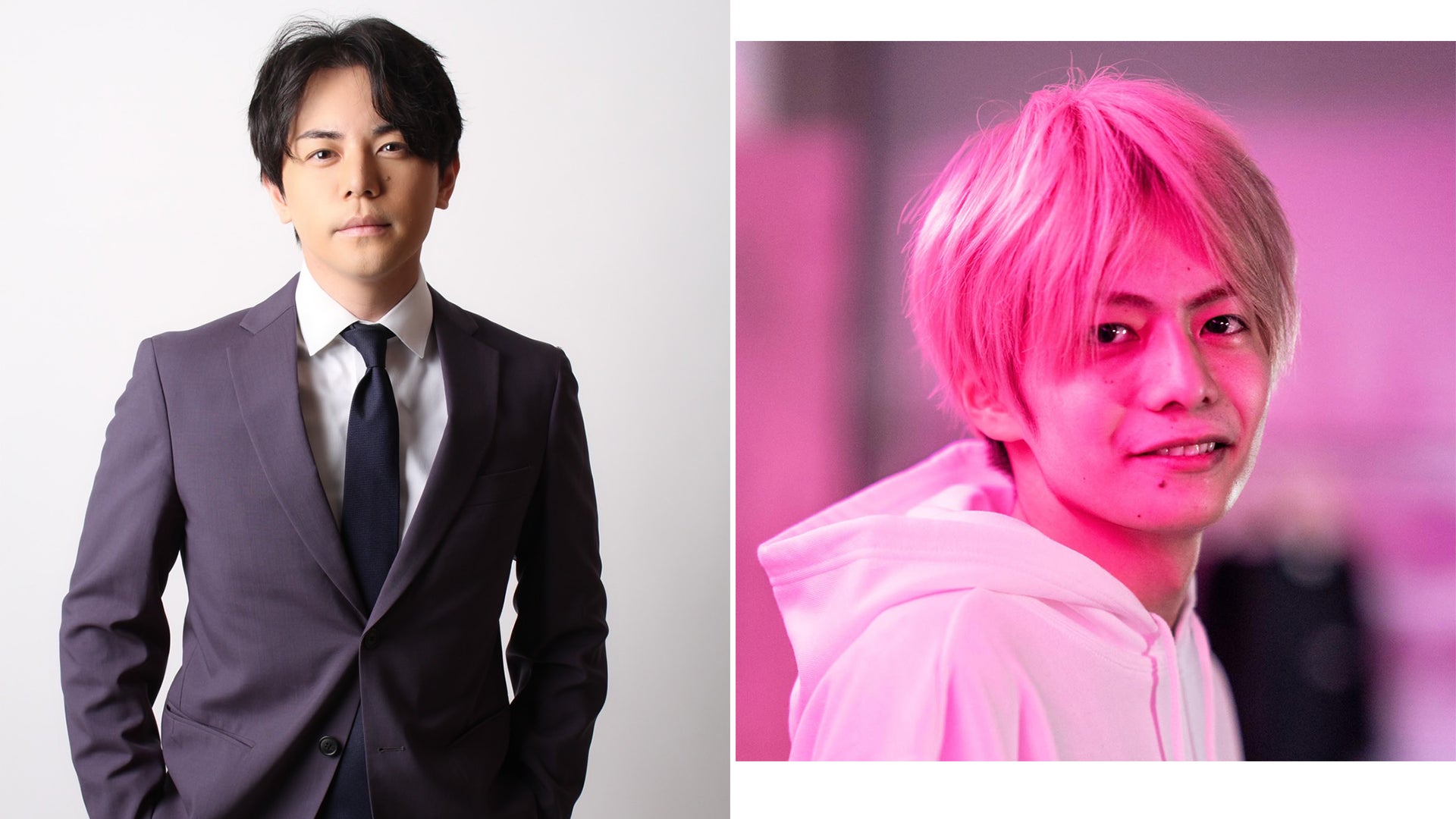 https://twitter.com/sudetaki
◆ Live: Kosuke Hiraiwa (picture on the left)
In 2011, he joined Asahi Broadcasting as an announcer, responsible for live performances such as professional baseball and J League. In the spring of 2018, he left the company, became the first e-sports announcer in Japan, and established ODYSSEY Co., Ltd., which focuses on e-sports business.

Currently, he is one of the most sought after people in esports, not only from the media, but also constantly asking for live commentary from various fields.
◆ Description: Akira Suda (right picture)

The anchor of the professional e-sports team ZETA DIVISION. As an Apex hero, AIM’s professional players and teams are all top-level, and the game commentary and coaching videos have attracted much attention.

It opened last November. The goal is to develop the fusion of e-sports and entertainment (=music), which has been in full swing in recent years, into a world-wide comprehensive entertainment event that the world aspires to.
The first project of the project, held on December 11 last year, was a dream competition that invited professional teams and streamers from Japan and overseas who were both popular and capable in Apex Legends. Also, as a special guest, in collaboration with Sony Music Japan International, we invited UK chart-topping DJ/producer “SIGALA-Sigala” to hold a special live broadcast that can only be seen here. A DJ set in a virtual space reminiscent of the Apex Legends training ground also attracted a lot of attention.
Company Name: XENOZ Co., Ltd.
Headquarters location: 701 Kawasaki City, Kanagawa Prefecture, Kawasaki-ku, Ekimae Honmachi 15-5
Representative: Yuri Yoichi
Established in 2012, the pioneer of the Japanese professional e-sports team registered in 2015.
Currently, it has 10 divisions and is one of the largest teams in Japan, with multiple achievements in domestic and foreign competitions.
“HP” https://www.scarz.net/ “Twitter”

“Instagram” https://www.instagram.com/scarz_jp/
<< 联系方式>> https://www.scarz.net/contact
Company Name: Sugar Bits Co., Ltd.
Representative: Takemoto Masashi
In 2002, the first domestic DJ exclusive management and label business began.
Since then, for 20 years, he has been involved in many musical entertainment and festival productions not only in Japan but also overseas.
《HP》https://www.sugarbitz.com/“Twitter”