With the redevelopment of Meiji Jingu Gaien, nearly 900 trees were felled. The Tokyo Metropolitan Government and businesses explained that they would plant more trees than fell, but Professor Mikiko Ishikawa of Chuo University’s research and development agency, who asked for a review of the plan, said: “Every tree has a history and it is beneficial. There is no such thing. While walking in the outer garden, I asked Mr. Ishikawa about the meaning of a 100-year-old tree. (Tomoyuki Morimoto) 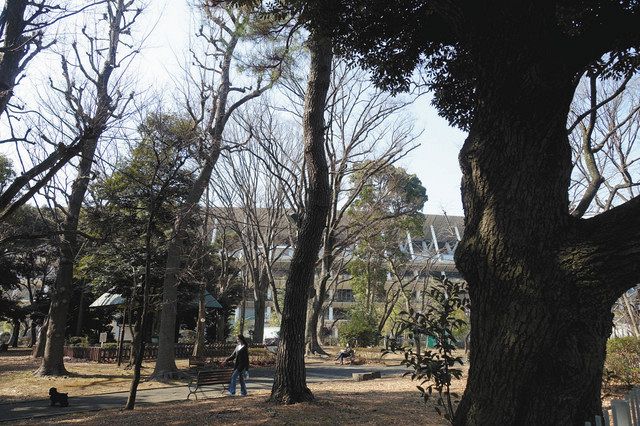 There are big trees in the forest in the reconstruction area that Professor Ishikawa and I visited. In the spring sunshine, you can see people taking off their coats for a walk. You can see the National Stadium in the back.

“It’s good, most of them are over a hundred years old, not over a hundred years old.” There are many thick trunks in the corner of the transformation area, and two adults who stretched out their hands were barely able to surround them. According to Mr. Ishikawa’s investigation, there are fears that many people will be recorded.

Guy isIt was built with 1926 (Taisho 15). In both cases, landscaping scholars envisioned the creation of greenery in 100 years in response to the wave of urbanization that followed the Meiji era. However, each concept is considered to be the exact opposite. The purpose of the inner garden is to become a “forest without people”, growing with the force of nature, the purpose of the outer garden is to become a “garden where people gather”. 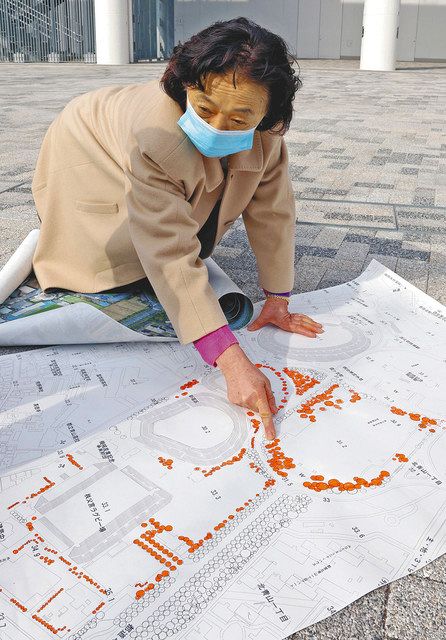 Professor Mikiko Ishikawa of Chuo University points to the location of trees in Shinjuku Ward, Tokyo = 1st to explain

During construction, a sparse forest was arranged around the lawn square in the center of the site, and a forest was built around it. This is a “green gradient” that gets darker further out. Ginkgo biloba, castanopsis, oak, cedar, zelkova, Japanese red pine…and what kind of trees you plan to plant where. “Does anyone in Gui Palace or Korakuen believe they will build buildings, cut down trees, but plant new ones?”

◆ Donations from all over Japan and Sakhalin

The place I heard this story was in one of the little forests outside the woodland. Evergreens are planted together with deciduous trees that do not shed their leaves, and they glow even in winter. This is because of the assumption that people will take walks. On this spring day, a man took off his coat and sat on a bench.

Many of these giant trees were likely donated from across the country. An unprecedented project to create plantations. Many trees are donated from all over the country for the construction of the inner and outer gardens. According to documents at the time, a man used his pension to buy pine trees. There are also cases where famous local trees were sent out. Stay away from Sakhalin. Railway companies cut transportation costs in half. “Everyone has a story that the donated trees are still alive.”

The facilities in the outer garden were also damaged by the war, but the aerial photos Mr. Ishikawa showed shortly after the war showed that the trees escaped the war. But these trees can be cut down.

Mr. Ishikawa pointed out the importance of “Gaien is a cultural heritage representing modern Japan. It is not something of the past and is still loved by many people every day”. Considering the tree donations by landscape architects and citizens 100 years ago, he said, “As long as the young trees are planted, the number can be met.”

According to the capital, area is often used as an indicator of greening. However, this handles huge old trees as well as dwarf young trees and lawns in the same row. According to a draft environmental impact assessment submitted to the capital by companies such as Mitsui Fudosan, the green space coverage (the area occupied by green space) after development is expected to increase, while the amount of greenery is expected to decrease. The reduction of old trees seems to have an impact.

At present, the lawn plaza at the center of the landscape has been transformed into a plaza where many people play lawn baseball, but the nature of the place open to the public has not changed. Amenities such as the softball field, batting center and driving range are expected to disappear during the redevelopment. The character of the “Sports Park” is subject to change, centered around a baseball field, football field and membership tennis courts used by top players. 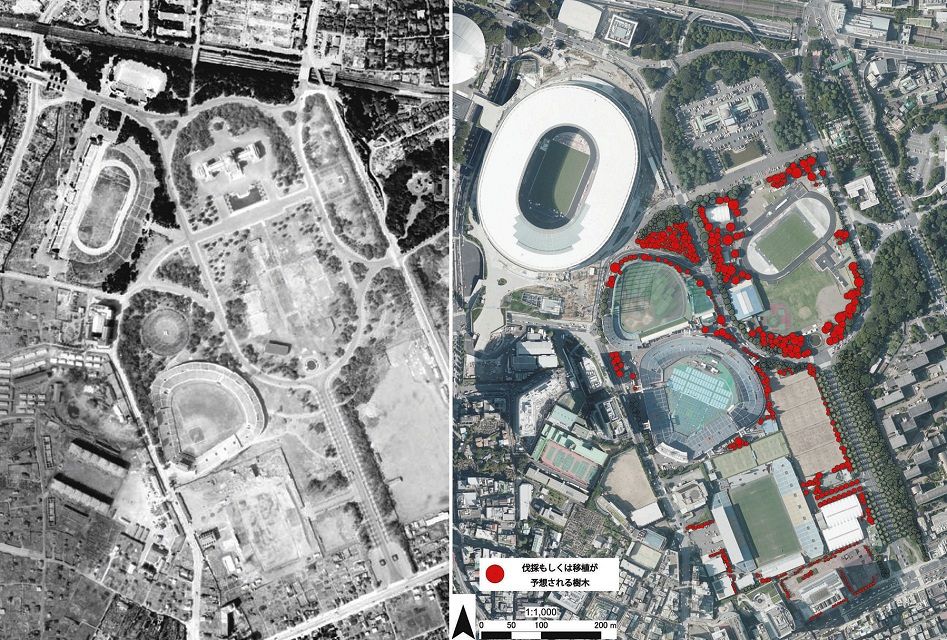 (Left) The outer garden of the Shrine after the war. It turns out that many trees escaped the war = taken around 1945-50, courtesy of the Geographical Survey (right) in what is now Jingu Gaien.The red markers are about 1000 trees that may be felled or transplanted = created by the Green Infrastructure Laboratory of the Research and Development Institute of Chuo University

According to the operator’s submission to Shinjuku City, 892 trees may be felled, nearly half of the 1,904 trees in the reconstruction area, and 145 trees will be transplanted. Is there a problem with the transplant?

According to the Japan Science Council, about 1,500 trees were felled and about 200 trees were transplanted in the same outer garden before rebuilding the National Stadium. 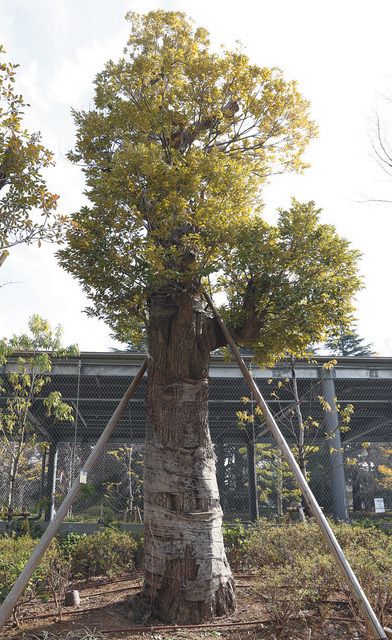 Sudajii has deeply pruned branches.Transplant and rebuild the National Stadium

I found Sudai with the “transplant” label near Mr. Ishikawa and the National Stadium. The branches are deeply trimmed. “In some cases, because of transplants, branches fall off and become like “electric poles,” he said. ”