– New co-op fighters like “Ryu” and “Chun-Li” are now available! Other cooperative fighters will be released one after another!
● Updated “Dream Battle” content with brand new content to compete for pure power!
● Earn rewards in various events to commemorate the co-op update! 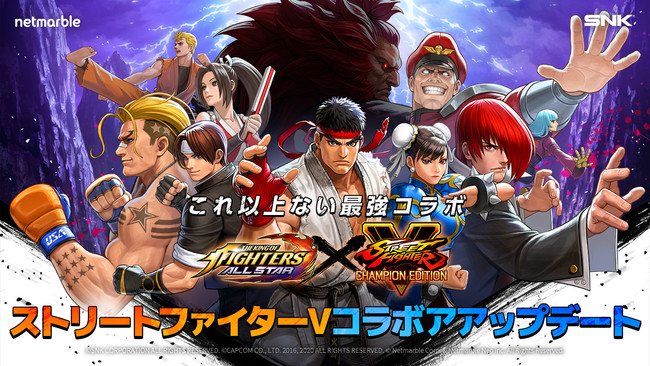 Netmarble, an ultra-exciting smartphone action RPG, THE KING OF FIGHTERS ALLSTAR (KOF ALLSTAR), hits Capcom’s hit fighting game on Thursday, March 24th. We are pleased to inform you that we have partnered with you to update the game Street Fighter V Champion Edition (hereafter referred to as Street Fighter V). 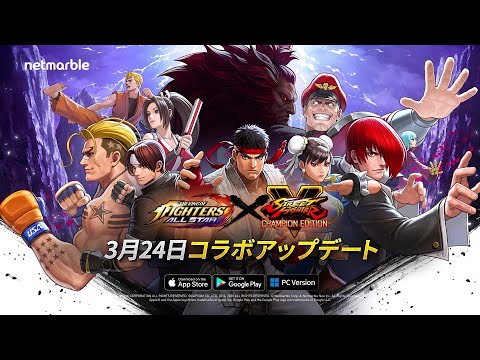 “Street Fighter V” cooperative fighting is characterized by powerful performance and “passive skills”. When the physical strength reaches 50% or more, the attack power increases by 40%, and every 10% of the physical strength decreases, the damage received will be reduced. .. In the future, new cooperative fighters such as the popular fighters “Akuma” and “Vega” in the “Street Fighter” series will be released one after another.

◆ Compete for true abilities! New PvP content “Fantasy Match” is here!
The new “Dream Match” content is a competitive content where you can use a variety of fights regardless of character rarity or stats, and you can compete purely for the player’s abilities. You can also earn various rewards by participating in competitions.

◆ There will be several “Street Fighter V” collaboration commemorative events!
“KOF ALLSTAR” will hold various events to commemorate this collaboration update.
In the newly opened “Linked Raid Dungeon” and “Linked Guild Raid”, you can get rewards such as advanced enhanced hammer, ruby, SFV soul random box, etc. In addition, there will also be a cooperative commemorative login event, a lucky chance event, a mini dungeon event, etc., and players will be able to obtain the cooperative warrior “Chun Li” and many rewards for free through various events.

For more information on the Street Fighter V collaboration, check out the dedicated website and official forum.

◆ Win great prizes!”Street Fighter V” Collaboration Commemorates Twitter Event
To commemorate the collaboration with Street Fighter V, we will be hosting two Twitter events where you can win luxury prizes like Amazon gift certificates through sweepstakes.
Please retweet by answering the question of the campaign video tweet posted on the official Twitter of “KOF ALLSTAR”. Among those who retweeted, 10 people will receive an Amazon gift certificate worth 10,000 yen through a lottery, and those who answer the question will receive an iPhone 13 through a lottery.
The first will be released on Thursday, March 24, and the second will be released on the official Twitter of “KOF ALLSTAR” on Saturday, March 26. All activities are subject to the official Twitter of “KOF ALLSTAR”.
We very much look forward to your participation. 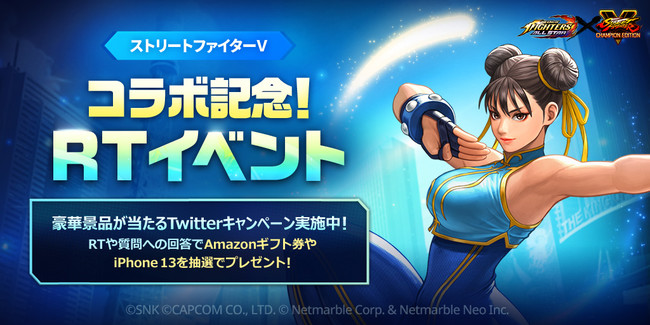 * This campaign is provided by Netmarble. Amazon and Apple are not campaign sponsors.

◆The cooperation commemorative special program will be broadcast live at 20:00 today!Pro Player Review Collaboration Updates Fastest
A special program commemorating the “Street Fighter V” collaboration will be broadcast live today, March 24th (Thursday) at 20:00. A professional player familiar with the “Street Fighter” series will appear on the show, leaving behind the attractiveness of “Street Fighter V” cooperation, such as the introduction of cooperative content, the actual combat gameplay of cooperative stories, and the unique communication of fighting games. battle plan. We will deliver without problems.
We also have an audience participation gift program, so please check it out!
* Program content may be urgently changed due to circumstances. 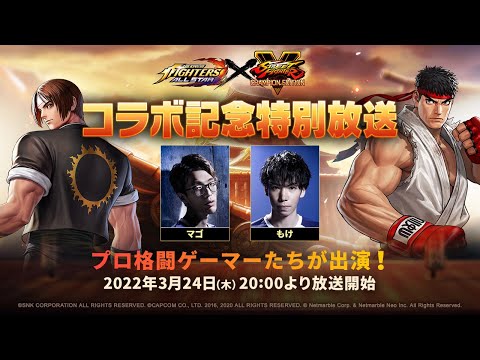 ◆”The King of Fighters All-Stars” とは◆
“KOF ALLSTAR” is a mobile action RPG where you can easily enjoy gorgeous skill moves and exhilarating combos from the fighting game series “The King of Fighters”. A smartphone game with characters from The King of Fighters ’94 to the 14th numbered consecutive series in the King of Fighters 14 series with the highest level of graphic quality while maintaining the original expressions. I will go to war. Not only the sound in the game, but also the nirvana, super nirvana, and combos are faithfully reproduced. In addition, “KOF ALLSTAR” original fighters and stories will also appear. 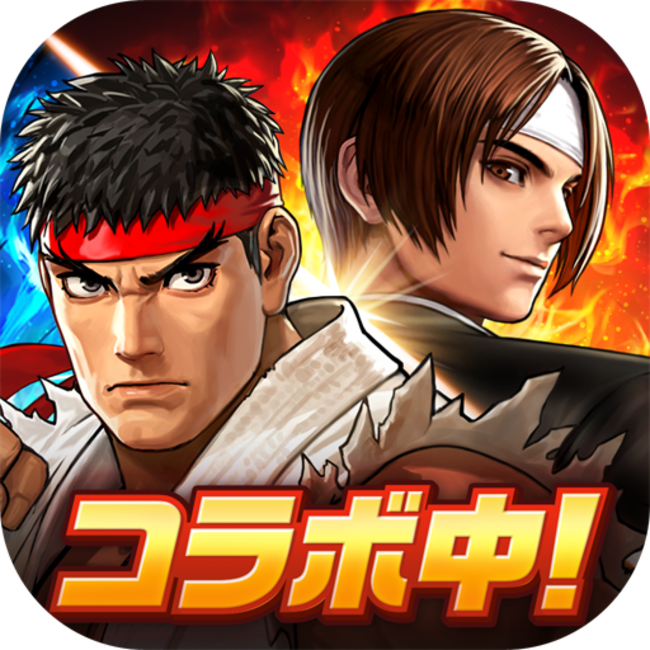 ◆ About Street Fighter V ◆
The Street Fighter series followed with the first arcade game console in 1987, followed by Street Fighter II in 1991. The innovative fighting system has attracted much attention, the fighting game genre has been established, and the cumulative global shipment of home games has reached 47 million (as of the end of December 2021). More than 30 years after its launch, it is still popular all over the world and has become a leader in the field of e-sports fighting games.
“Street Fighter V” is the first time in the history of the “Street Fighter” series to introduce a “cross-platform” gameplay where “PlayStation(R)4” users and PC users can play against each other.

◆ About Netmarble ◆
Netmarble was established in South Korea in 2000, with “Seven Knights 2”, “Nino Kuni: Cross Worlds”, “Marvel Future Revolution”, “Paradise 2 Revolution”, “The Seven Deadly Sins – Battle of Light and Darkness-“, Blade and Soul Revolution”, “Marvel Future Fight” and other innovative titles, we are a top developer and publisher pushing the boundaries of the mobile game experience.
Netmarble, the parent company of Kabam and SpinX Games and a major shareholder in Jam City and HYBE (formerly Big Hit Entertainment), is a mobile game based on its strong franchises and partnerships with global IP holders. world. For more information, visit https://company.netmarble.com/en.
In Japan, Netmarble Japan Inc., a subsidiary of Netmarble Japan, provides mobile gaming services for smartphones. For more information, please visit https://www.netmarble.co.jp.