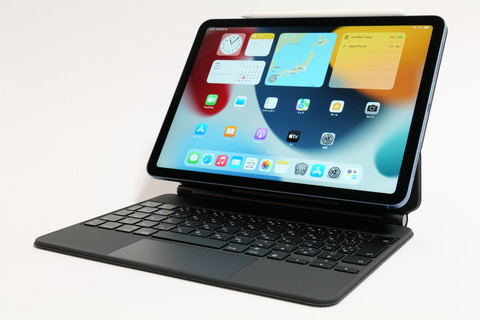 On March 18, Apple released the “iPad Air (5th Gen)” equipped with the “Apple M1 chip” in the SoC. This is the second iPad series with Apple M1 after the iPad Pro.

This time, let’s see how the ease of use is different from the iPad Pro, and whether there is a difference in performance.

Unfortunately, only 64GB and 256GB of storage are available. Since it comes with an Apple M1, I want a model with at least 512GB.

I’m a little concerned about the storage speed. Using JazzDiskBench’s Sequential Read, the iPad Air was 1,333.33MB/s and the iPad Pro was 2,723.40MB/s, about half the speed. iPad Air and iPad Pro or each capacity may use different performance storage.

The difference in time required to copy files from external storage to internal storage is within the expected range. iPad Air is connected to USB 3.1 to SSD “SSD-PH1.0U3-BA”, iPad Pro is connected to Thunderbolt 3 to SSD “Portable SSD X5 MU-P85008”. , using 2.36 times the iPad Air. However, if you can copy 10GB (5 files) in 25.69 seconds, that’s a practical speed for taking photos and videos.

The run time for continuous YouTube video playback was 10 hours, 20 minutes and 18 seconds, which is 1.24 times that of the iPad Pro. Measurements were made with the same display at 50% brightness and 50% volume, but the iPad Pro may not work well in this condition because the original brightness is high. If you match the actual brightness exactly, rather than the brightness percentage, that should reduce the difference in runtime.

I wish the iPad Air and iPad Pro had night mode

The iPad Air has a small number of cameras, but the image quality is quite high. As expected, the difference can be seen by zooming in on the photos taken with the iPhone 13 Pro Max. But even if you compare them on a 27-inch screen, at least for photos taken during the day, it’s hard to tell the difference.

Still, it’s a far cry from the iPhone 13 Pro Max, which has Night Mode, when it comes to shooting night scenes. I don’t think there’s a reason why the iPad Air and iPad Pro with the Apple M1 can’t have night mode, although the Mi Pad 5, which can be purchased for 43,780 yen, does. Please generously introduce the technically achievable functions, so that the device can be used as long as possible.

The iPad Air features a 12-megapixel ultra-wide-angle front-facing camera that supports “midframe,” a feature that keeps people inside the frame. All iPads now support the center frame feature. The picture quality on the front-facing camera itself is excellent, bright even in indoor light, and captures natural-looking colors. Coupled with the mid-frame function, there is no doubt that it is a perfect network conferencing device.

The iPad Air, powered by Apple’s M1, has evolved into a model that’s closer to the iPad Pro, but differs in a number of specs. However, the performance in practical applications is about the same.

Regardless of security, there is no “Face ID while wearing a mask” feature on the iPad Pro now, and Touch ID is easier to use. For users who focus on processing performance, but the functions can be divided to a certain extent, the iPad Air can be said to be an excellent cost-effective product.