As a result, we can expect to increase the scale of resource plants, such as crops that are plants necessary for our daily life, and to grow plants efficiently.

The research results were published in the American scientific journal Proceedings of the National Academy of Sciences on February 22, 2022 (February 21, Japan time).

Myosin is a typical motor protein that converts the chemical energy generated by the hydrolysis of ATP (adenosine triphosphate), which is ubiquitous in eukaryotes, into kinetic energy for movement along actin fibers.Note 1)About 80 years ago, it was discovered to be a protein that causes muscle contractions in animals. Myosins are present in almost all eukaryotes, including plants and animals, and are a superfamily that can be divided into 79 classes according to their amino acid sequences.Note 2)configured.

In the cells of plants and algae, an intracellular flow called cytoplasmic flow occurs. This is thought to be because the cells of plants and algae, whose cells are several to several thousand times larger than animal cells, efficiently distribute oxygen and nutrients absorbed from outside the cells throughout the cell (Fig. 1a). Cytoplasmic flow is caused by the hydrodynamic effects of myosin class XI (myosin XI) binding to organelles, such as the endoplasmic reticulum that moves along actin fibers (Fig. 1b). The flow rate is thought to be equal to myosin XI in the plants and algae that cause it. 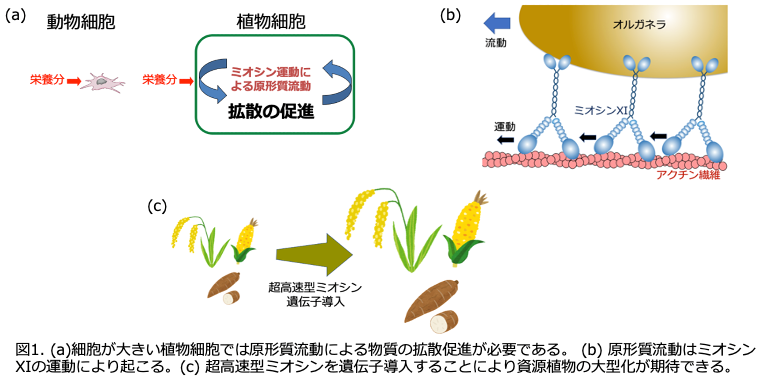 The research team previously used angiosperm myosin XI as chara braunii (Chara Coral) CcXI of myosin XI (myosin XI, which is three times the rate of angiosperm myosin XI), when replaced by molecular biology techniques, the size of the plant increases with the rate of cytoplasmic flow.Note 3)..however, the substance of ultrafast myosin 10 times faster is a mystery. If the molecular mechanisms that enable ultrafast myosin gene segregation and ultrafast movement are elucidated, it can be expected that plants will grow through increased cytoplasmic flow rates of resource plants (Fig. 1c).

The research was recently conducted by Assistant Professor Nishiyama at Kanazawa University and Associate Professor Sakayama at Kobe University.beet) (Fig. 2a) Genome decodingNote 4)The four predicted myosin XI genes were isolated fromCBI named them XI-1, 2, 3 and 4. When a phylogenetic tree was created from the amino acid sequences of these four motor regions, it was divided into two subgroups, the previously reported 24 µm/s Chara braunii (Chara Coral)ofccXINote 5)belongs to subclass 2CBXI-4 orthologNote 6)The result is (Fig. 2b).

Thus, these four myosin XIs were expressed in cultured insect cells, purified, and then purified.in vitroexercise testNote 7)Subclass 1 when measuring the speed of motion of motor actin fibersCBwith XI-1CBXI-2 is an ultrafast myosin of about 70 µm/s.CBXI-1 was found to be the fastest myosin in the living world with a velocity of 73 µm/s (Fig. 2c).

Furthermore, as the first crystal structure analysis of myosin XI, Arabidopsis myosinexistHigh-resolution structural analysis of XI-2 was successfully performed.getexist3D structural information from XI-2CBI made a 3D structural model of the XI-1.From this 3D structural model and gene mutation experimentsCBWe revealed that the secret of XI-1’s superluminal motion lies in its mode of binding to actin fibers (Fig. 2d). The fastest ultrafast myosin discovered in the biological worldCBThe XI-1 gene is expected to be used to increase the yield of resource plants, and if food production is increased by expanding the size of plants, it is expected to cope with food shortages and population growth caused by natural disasters. In addition, by using the ultra-high-speed myosin XI gene, we can expect to develop nanomachines for ultra-high-speed motion.

◆ Explanation of words and phrases

Note 2) Myosin superfamily
A group of proteins derived from a common evolutionary ancestor and having the same domains and motifs is called a superfamily. The myosin superfamily consists of 79 myosin classes. Myosin classes are written in Roman numerals. Different classes of myosin have markedly different myosin properties, such as kinetic rate and ATP hydrolysis activity. Furthermore, even within the same class, different species of organisms have different myosin properties.

Note 3) Cytoplasmic flow velocity as a determinant of plant size.

Note 6) Ortholog
A set of genes is separated from a gene and a corresponding gene from a common ancestor in two different organisms with speciation.

Note 7)in vitroexercise test
A method for observing, recording, and analyzing the motion of fluorescently labeled actin fibers driven by myosin immobilized on a coverslip using a fluorescence microscope, and measuring the speed of myosin-driven actin fiber motion.