The result of this research is the “cell plate.”[2]Not only helps to elucidate the mechanism of mitosis in plant cells with insertions, but also contributes to plant biomass[3]It can be expected to help create useful technology.

Information on the metabolites that make up mitotic cells is expected to reveal important factors in mitotic progression and the mechanism of cell plate insertion, but it corresponds to each subphase of mitosis, and the composition of intracellular metabolites is unclear.

This time, the team analyzed the mitotic metabolome of a plant using cultured tobacco cells with visualized chromosomes.[4]We succeeded in elucidating the fluctuation of intracellular metabolites during mitosis.

This study is based on scientific journals”plant physiologyPublished in the online edition (March 18: March 18 Japan time). 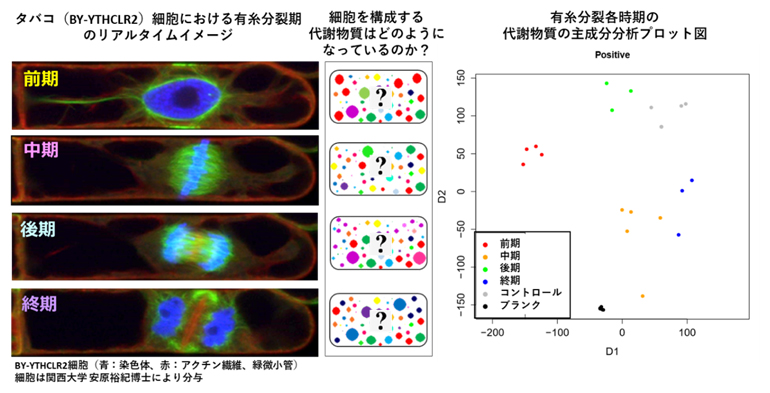 Eukaryotic mitosis is the cell cycle[5]It executes in M ​​cycles of G1, S, G2 and M cycles.Two sister chromatids during mitosis[6]is an important process for accurate and uniform distribution to both daughter cells. Mitosis is divided into prophase, metaphase, anaphase and telophase subphase, the chromosomes in the prophase are condensed, and the chromosomes in the metaphase are arranged on the equatorial plane. Chromosomes then segregate at anaphase and sister chromatids decondensate at the final stage.

During mitosis in plant cells, a “cell plate” (new cell wall) begins to insert between daughter nuclei that divide into poles at the end of the cycle, and subsequent cytokinesis completes cell division. In plants with strong cell walls surrounding the cells, the normal insertion of the cell plate into the division plane allows for an accurate and even distribution of chromosomes and cytoplasmic components.Chromosome and cytoskeleton based on previous imaging analysis[7]small cells[7]It has been elucidated that intracellular structures such as these complete the insertion of the cell plate (cell division) while adopting coordinated and dynamic dynamics throughout the division phase.

Therefore, information on the substances that make up cells should also be tightly controlled, and it is expected that, if known, important factors in the progression of mitosis and the mechanism of insertion into the cell plate will be elucidated. However, the composition of intracellular metabolites corresponding to prophase, metaphase, anaphase, and telophase remains unclear. This is because the mitotic stages cannot be completely synchronized, and methods for collecting large numbers of cells involve information about cells in other substages. Therefore, the research team’s goal was to establish a method to obtain and analyze cells in prophase, metaphase, anaphase and telophase.

First, the research team visualized the nuclei (chromosomes) of tobacco BY-HR cells to observe prophase, metaphase, anaphase, and telophase in detail.[8]established (A in the figure below).Wall-free protoplasts from BY-HR cells to obtain only one cell of interest[9]Cells corresponding to each of prophase, metaphase, anaphase, and telophase were prepared and manually obtained using a robotic arm in glass capillaries, depending on the state of the chromosome.Glass Capillary Mass Spectrometer[10]Estimate and quantify intracellular metabolites with direct setup.

It was found that metabolites in prophase, midphase, late phase, and telophase exhibited time-specific accumulation patterns and were tightly controlled (Figure B below). In addition, it was revealed that a large amount of macromolecular metabolites were detected before the observation of the cell plate, i.e., late stage, and decreased in the final stage (lower panel C). Furthermore, we were able to elucidate the increased high molecular weight lipids in late and late stages. 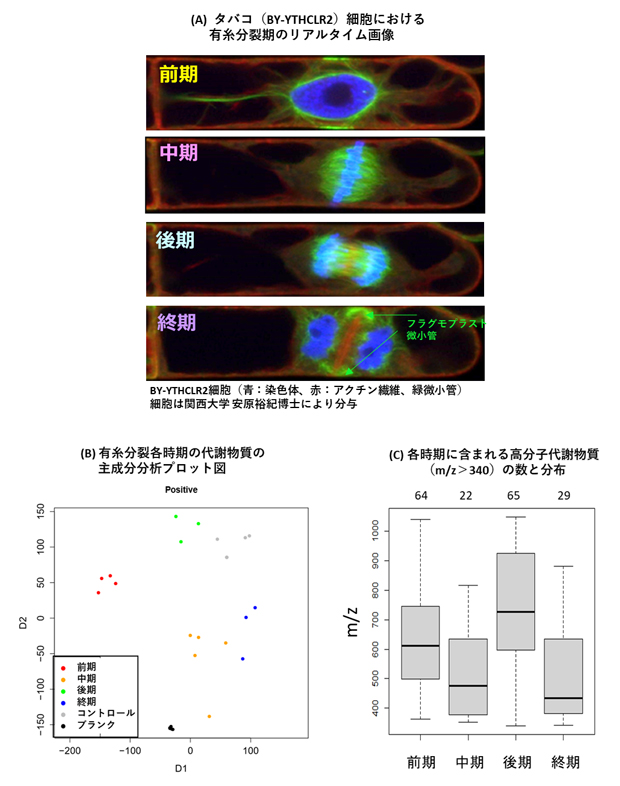 In this study, we successfully captured the intracellular metabolites of each mitotic subphase and took a step towards understanding their role in plant cell mitosis. In the future, we plan to carry out this study to identify metabolites that are critical for the progression of mitosis and normal cell division.

The cell plate inserted during plant cell division is the newly formed cell wall.Cellulose is the main component of plant cell walls, while bioethanol[3]It is a resource that becomes a raw material, eg. The results of this study contributed to plant biomass research in terms of cell number control and material production, and as a result, the United Nations declared the Sustainable Development Goals (SDGs) in 2016 as clean energy research.[11]Among them, it can be expected to contribute to “7. Energy and cleanliness for all”.

Furthermore, if we perform single-cell metabolome analysis not only in plant cells, but also in various species, it is believed that part of the common control mechanism of mitosis will be elucidated.