Contaminated water containing high concentrations of radioactive substances continuously produced at the Tokyo Electric Power Fukushima Daiichi Nuclear Power Plant (Okuma Town, Futaba Town, Fukushima Prefecture) produces polluted waste during treatment and storage. On the 2nd, the interview team for this article entered the nuclear power plant and visited the storage site. TEPCO and the government plan to release purified water into the ocean in spring 2023, but the disposal of large amounts of radioactive waste has been delayed. (Kenta Onozawa)

◆ Concentrated waste liquid “To be honest, there are no specific measures” 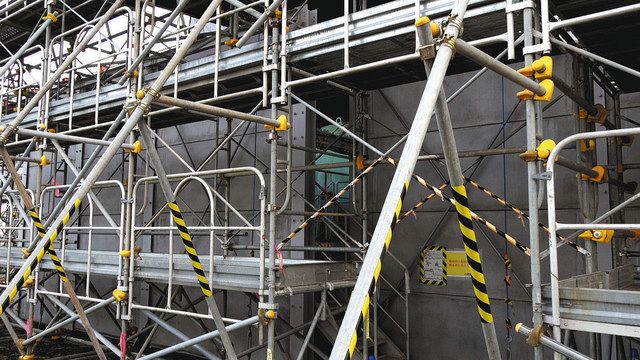 A facility that stores concentrated waste liquid after evaporating high-concentration sewage. Light blue tanks line up behind thick concrete walls. At TEPCO’s Fukushima Daiichi nuclear power plant in Fukushima Prefecture, the interior of the wall has a maximum of 800 microsieverts per hour.

“Honestly, there is no concrete plan on what to do with it yet,” a TEPCO spokesman said bitterly in a corner of the expansive tank area on the west side of Units 1 to 4. Covered cabin surrounded by concrete walls in front of you. Through the gap in the wall, you can see a long light blue sink. The dosimeter I brought showed about 0.5 microsieverts per hour at the tank farm, but near the hut it jumped to 4 microsieverts.

The contents of the tank emit strong radiation through the concrete with a thickness of about 20 cm, which is the “concentrated waste liquid” produced immediately after the accident. It is the waste liquid sediment produced during the desalination of highly salt-contaminated water due to the impact of the tsunami and reused to cool the reactor.

It is cloudy and refractory and cannot be approached in large doses. When Fukushima prefecture confirmed the location in January 2008, there was a maximum of 800 microsieverts per hour inside the wall. If you stay there for 1 hour and 20 minutes, you will reach the annual exposure limit for the average person.

200 cubic meters of turbid waste liquid and 9,000 tons of supernatant water. Contaminated water treatment is stable and will not increase. TEPCO plans to start trial processing in fiscal 2011, but has not even started the validation of the method. 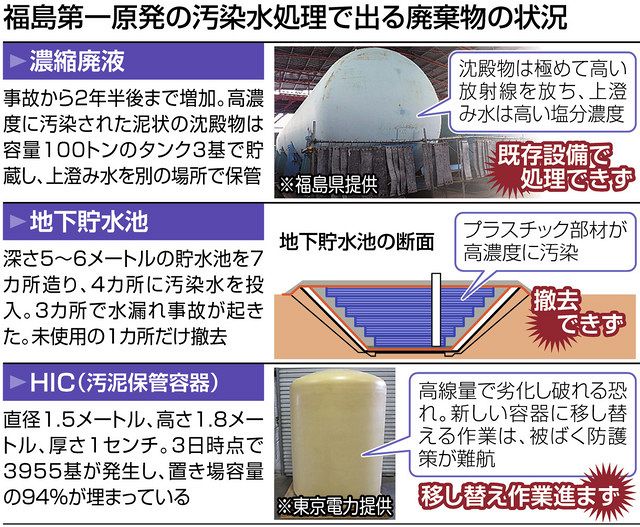 On the north side of the hut, there is a clearing that rises like a ring. It is where the underground reservoir that caused the polluted water leakage accident in 2013 was buried.

Back then, the storage of contaminated water was a tightrope walk. TEPCO, which was driven in, dug a hole under the power line where it could not build a water tank, and covered it with a geomembrane. A total of about 24,000 tons of sewage was put in, which mainly contained radioactive strontium. . However, it leaked into the ground and became unusable.

Although the clean-up of the contaminated water has been completed, the plastic material thrown into the pool as reinforcement was heavily contaminated and left behind. As I stood on the pond, the dosimeter quickly changed to 3 microsieverts per hour. “I thought if there was pure water in it, I could take it, but I couldn’t do anything because I was in contaminated water,” a spokeswoman said.

Treated water planned for discharge into the ocean is purified by a polynuclide removal facility (ALPS). Slurry waste is also produced during processing, which is stored in a polyethylene container called HIC (1.5 meters in diameter, 1.8 meters in height, and about 1 cm in thickness).

In the storage location on the south side of the site, the upper part of the HIC is visible within the concrete wall. Some HICs with high-dose sludge have exceeded their useful life and will reach 87 by the end of 2010. Forced to transfer to a new container due to the risk of tearing due to spoilage. However, it will take some time for exposure protection measures to be put in place at work, and the replacement of heavily polluted containers on February 22 has just begun.

Once the treated water is released into the ocean, the number of tanks of about 1,000 will gradually decrease. However, there are currently no plans to eliminate the generation of polluted water, and purification treatment will continue. During this period, waste from treatment will accumulate, so consideration of long-term management methods cannot be postponed.