The results of this study are non-GMO[1]It is a transient modification of crops and is expected to contribute to increased pathogen resistance and metabolite modification.

The collaborative research team this time is “Cell Penetrating Peptide (CPP)”[2]Based on “”, we successfully introduced nucleic acid into plants by spraying nano-scale carriers. In this way, foreign DNA introduced from plant cells or chloroplasts transiently produces proteins, while also producing siRNA.[3]We successfully inhibited the expression of the target protein in plant cells by introducing.

This study is based on scientific journals”ACS NanoPublished ahead of the online edition (23 February: 23 February Japan time). 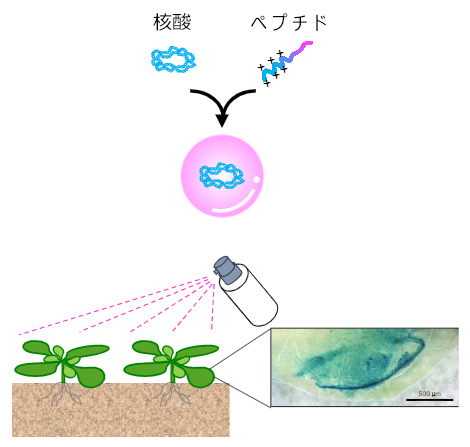 Plant trait modification solves food and environmental problems and brings various wealth to society.However, genetic recombination based on the introduction of foreign DNA into the plant genome[1]Retrofitting factories on an industrial scale is time-consuming and expensive, and there are concerns about human and environmental safety.

Keiji Numata and his team leaders have been developing methods for modifying plants through gene transfer using functional peptides as carriers.Functional peptide modification is simple, low cost, specific organelle[4]This is a method that can be modified by targeting, but only for small-scale introductions, such as small plants or parts of leaves.Note 1-3).

Since spray treatment is a technique that can even be applied on a large scale, such as on farms, the joint research team is now trying to develop a method for plant gene transfer using functional peptides through spray spraying.

The collaborative research team first selected a “cell-penetrating peptide (CPP)” suitable for introducing nucleic acids by spraying. Then, complexes of the selected CPP and the DNA to be introduced are prepared, suspended in a liquid, and sprayed on the leaves of the plants. As a result, in Arabidopsis thaliana as a model plant, tomato and soybean leaves as crops, DNA was efficiently taken up into cells, and a reporter gene was obtained from the taken up DNA.[5]GusExpression of (β-glucuronidase) was confirmed (Fig. 1A, B). Next, RNA interference occurred when a complex of CPP and siRNA was formed and sprayed on the leaves of transgenic tomatoes and Arabidopsis thaliana expressing the fluorescent protein.[6]The expression of fluorescent proteins (GFP and YFP) was successfully inhibited (Fig. 1C). 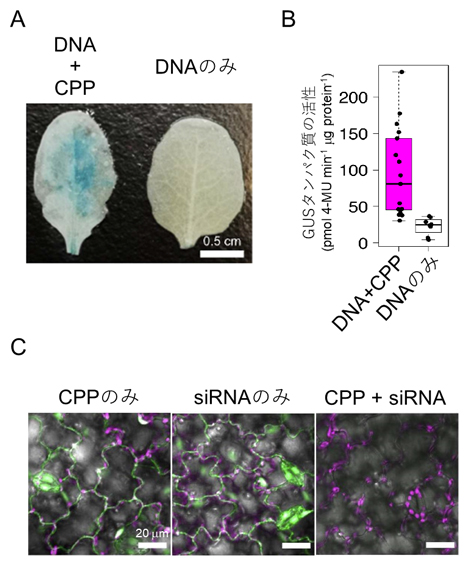 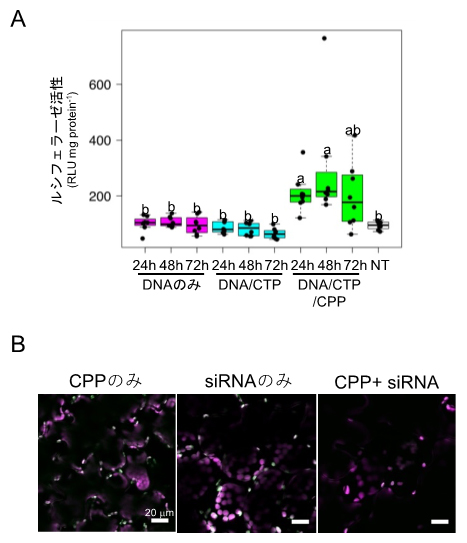 From these results, it can be seen that the sprayed DNA and RNA are delivered to a wide range of plant cells and even organelles under the action of CPP and are non-genetically recombined, which can transiently inhibit exogenous gene expression and gene expression. .

In this study, we successfully delivered nucleic acids not only to the model plant Arabidopsis, but also to the leaves of crops such as soybean and tomato by spraying the vector with optimized CPP. This method can efficiently and transiently introduce nucleic acids into plants without special equipment, and is a non-transgenic crop that provides transient drug resistance, for example, on a farm-scale planting scale. to modify. On the other hand, risks such as unintentional introduction of nucleic acids into organisms other than target plants will need to be carefully assessed in the future.

In this study, we also observed inhibition of gene expression by introducing siRNA into the chloroplast, which is not thought to cause RNA interference. This is a result that subverts the traditional concept, and it is necessary to analyze the expression inhibition mechanism in detail in the future.

This study is based on the 17 Sustainable Development Goals (SDGs) set by the United Nations in 2016.[7]Among them, we can expect to contribute to “2. Zero Hunger” and “15. Conservation of Abundant Lands”.