Zhou Kashiwamine Graduate student, Faculty of Life Science and Technology, Tokyo Institute of Technology, Professor Hiroshi Tanaka, Institute of Chemistry and Life Sciences, Institute of Science and Technology Innovation, Professor Sosuke Imamura (and Nippon Telegraph and Telephone Corporation (NTT) Research Institute for Space Environment and Energy) The research team) is a collaboration with Professors Hiroki Shima and Kazuhiko Igarashi of Tohoku University Graduate School of Medicine to activate transcription factors for nitrogen uptake necessary for plant growth.[用語1]is MYB1[用語2]Algae, which can be said to be the prototype of plants, have a mechanism by which their functions are inhibited in an environment where nitrogen is sufficiently present.[用語3]used for clarification.

By comparing and controlling strains with full-length MYB1 and multiple strains lacking parts of MYB1, the research team identified a site that inhibits MYB1’s own function. In addition, we searched for proteins that bind to functional repression sites and elucidated the mechanism of repression. Furthermore, by applying this mechanism, we succeeded in producing algae that maintain high expression of nitrogen uptake genes even in nitrogen-rich environments.

Since nitrogen is a nutrient that determines the growth of not only algae but also plants in general, efficient intake of a large amount of nitrogen is considered to be an effective means for promoting plant growth and crop production.

By applying the nitrogen uptake activation mechanism elucidated this time to algae and crops, it is expected to help reduce the cost of algal biomass production and increase food yield in a low nitrogen environment.

Nitrogen is the main constituent element of amino acids and nucleic acids that make up living organisms, and it is a nutrient that determines plant growth, that is, yield. Plants mainly absorb nitrogen from inorganic nitrogen sources such as ammonia and nitrate, and nitrogen deficiency can significantly inhibit plant growth. Therefore, nitrogen fertilizer is the main component of crop fertilizer.

On the other hand, excessive spraying of nitrogen fertilizers can also cause environmental problems such as rivers, groundwater eutrophication, and greenhouse gas production. Even high-yielding varieties improved by the “green revolution” that began in the 1960s can increase yields, but on the other hand, they have low nitrogen absorption efficiency, require large amounts of nitrogen fertilizer to grow, and pollute the environment. become a problem.

One way to solve these problems is to increase the nitrogen uptake capacity of plants. Although many studies have been carried out, the control mechanism and analysis system of nitrogen uptake by plants are extremely complex, and there are still many unclear points.

In this study, we considered the use of algae, the origin of plants, to elucidate this mechanism. Algae are considered good materials for understanding complex plant mechanisms because their various mechanisms and analysis systems are simpler than those of plants. Like other plants, this algae activates a regulatory function that seeks to make up for the deficit by absorbing more nitrogen when the amount of available nitrogen sources dwindles. One of the regulatory functions of this uptake is to increase the expression levels of a set of genes that take up nitrogen contained in inorganic nitrogen sources such as ammonia and nitrate nitrogen into cells.

So far, Professor Imamura’s research group has been studying single-celled red algae.Mackerel(commonly known as: Xisong[用語4]), a transcription factor MYB1 that increases the expression levels of a set of nitrogen-absorbing genes when nitrogen in the surrounding environment is reduced was identified. However, it has been a mystery why the function of MYB1 is inhibited in the presence of sufficient nitrogen (Fig. 1), so this study was carried out to clarify this. 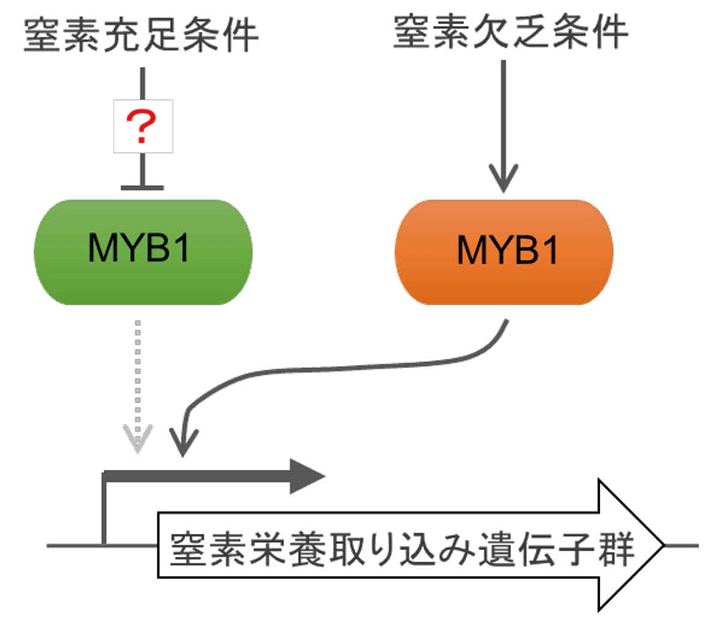 In the absence of an available nitrogen source, MYB1 induces the expression of nitrogen nutrient genes that promote nitrogen uptake. However, the mechanism by which MYB1 induces gene expression under nitrogen-sufficient conditions is unclear.

1. Identification of regions responsible for functional repression in MYB1

The research team attributed the inhibition of MYB1 function under nitrogen-sufficient conditions to MYB1’s own protein.

Therefore, first, in order to confirm which part of MYB1 caused the functional inhibition, the protein of MYB1 was added to the C-terminus.[用語5]We prepared multiple strains gradually deleted from the above and one full-length MYB1 strain without the defect (Fig. 2), and observed increases and decreases in gene expression levels in the nitrogen uptake group. 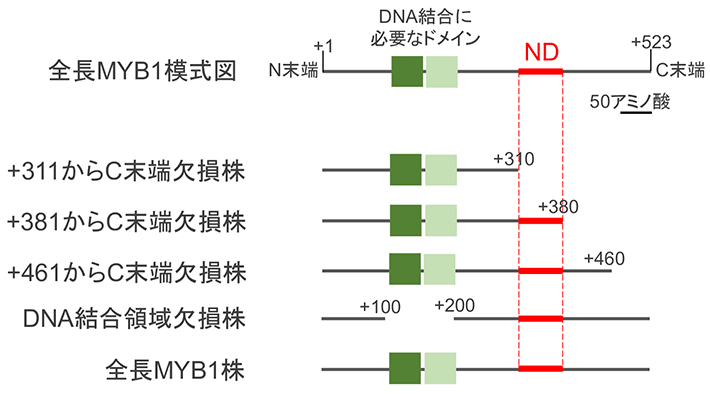 To identify regions that inhibit MYB1 function under nitrogen-sufficiency conditions, we prepared multiple MYB1 strains with progressively increased protein scraping regions starting from the C-terminus of MYB1 (right side of the figure), as well as gene numbers in the nitrogen-treated groups. (DNA binding region deficient strains were used as controls to confirm the accuracy of the analysis). The NDs identified in this study are the red areas.

As a result, in the strains in which the ND (negative domain) region of MYB1 was removed from the sequence, the expression of the nitrate uptake gene cluster induced under nitrogen-deficient conditions for the first time was observed under nitrogen-sufficient conditions. . observed (Figure 3. In the figure, nitrate transporters are representative of the nitrate uptake gene cluster.NRTas the picture shows).

image 3. Nitrate transporter genes as a set of nitrate uptake genes in each strain (NRT) accumulated

Each of the strains shown in Figure 2 was grown under nitrogen-sufficient conditions and the nitrate transporter gene (NRT) was observed in cells and only in the strain with the C-terminus deleted from +311 (left end).NRTGene expression was observed. From this result, it became clear that under nitrogen-sufficient conditions ranging from +311 to +380 of MYB1, there is an ND region that inhibits the function of MYB1 (see FIG. 2 ).

2. Elucidation of the regulatory mechanism by which the ND region leads to the inhibition of MYB1 function

Next, in order to elucidate the details of the regulatory mechanism of the ND region, as a result of searching for a protein that binds to the ND, “NDB1” (“NDB1″ (” “, a protein of unknown function.ND Secondlooking for protein 1It was revealed that “Name More” was specifically tied to ND.

Expression of the nitrate uptake gene cluster was increased in cells in which the ND-binding protein “NDB1” was disrupted, even under nitrogen-rich conditions, such as in ND-deficient cells.

These NDs orNDB1MYB1 was observed to be abundant in the nucleus where transcriptional responses occurred in deficient cells, and MYB1 binding to transcriptional regulatory regions of the nitrate uptake gene cluster was significantly improved.

From this, under nitrogen-sufficient conditions, ND and NDB1 inhibited the function of MYB1 (=promoted nitrogen uptake) (Fig. 4). 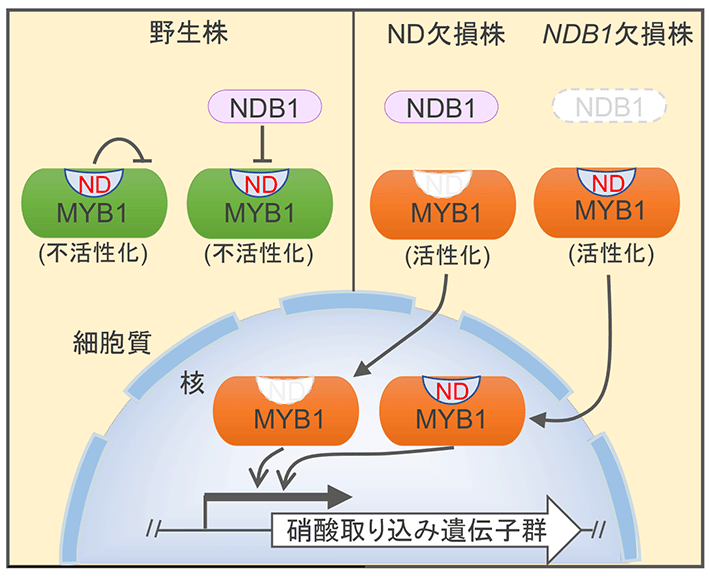 Figure 4. Schizon elucidates the mechanism of inhibition of MYB1 function under nitrogen-replete conditions

In nitrogen-sufficient wild strains, because NDB1 binds to the ND region and ND domain of MYB1, MYB1 is mainly retained in the cytoplasm, cannot enter the nucleus where gene clusters exist, and does not induce the expression of nitrate uptake genes.However, even in the presence of sufficient nitrogen, ND regiodeficient strains orNDB1In deficient strains, inhibition of MYB1 is released, thereby inducing expression of the nitrate uptake gene cluster.

The identification of regulators that inhibit the function of transcription factors that control nitrogen uptake and the elucidation of the mechanisms of these factors achieved in this study are the world’s first examples of algae and plants. The same type of transcription factor as MYB1 has been shown to regulate nitrogen uptake by land plants through nitrogen deficiency. Therefore, it is believed that applying the control mechanism discovered this time using merozoites to terrestrial plants, especially cereals, will lead to improved yields.

On the other hand, in NDB1, homologous proteins are found in algae and mosses. In recent years, the use of algae to produce biofuels as one of the renewable energy sources has attracted attention. Like plants, algal cultures require large amounts of nitrogen nutrients during production, which is one of the factors that increases production costs. In biofuel-producing algae, if nitrogen could be processed more efficiently by disrupting the gene encoding the NDB1 homologous protein, this would lead to a reduction in the cost of biofuels. In this way, this achievement is expected to become a fundamental technology for using algae to produce useful biomass and increase food production.

The research was conducted with research grants from the Ohsumi Foundation for Basic Science, Naoji Iwatani Memorial Foundation, Takeda Science Foundation, and the Japan Society for Science.

[用語1]
transcription factor : transcription factor. It is a group of proteins that control gene transcription and has the function of regulating the (transcriptional) response that copies the genetic information of DNA into RNA. Specifically, it functions to place an “RNA polymerase,” a transcriptase that synthesizes messenger RNA using a DNA sequence as a template, at the transcription initiation site. Currently, more than 2,000 have been confirmed.

[用語4]
Split : The scientific name isMackerel(commonly known as split). Single-celled red algae (Susabinori, member of the algae family) found in hot springs in Italy. It is used as a model algae and as a model photosynthetic eukaryote because it is the first eukaryotic organism to have a 100% nuclear genome.