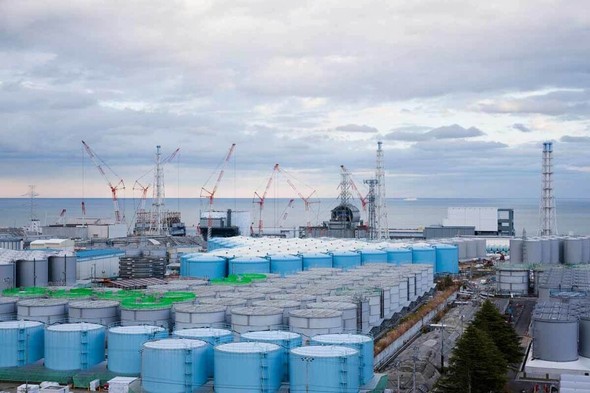 Since the Fukushima nuclear accident, TEPCO HD (hereafter referred to as TEPCO) has been injecting water into the reactor to cool the molten fuel, but in addition to that, there is groundwater flowing into the reactor building, which is why it is contaminated water. Contaminated water is removed by the Multinuclide Removal Unit (ALPS) to remove the radioactive material contained in it, but not all of it can be removed. In particular, tritium, which cannot be removed at all, is a hot topic, but dozens of other radioactive species are still present. ALPS-treated water is stored in a tank. According to Tepco’s announcement, the volume has reached 1.293 million cubic meters (as of February 24, 2022).

The government and TEPCO have steadily made a policy of dumping it into the ocean. The Ministry of Economy, Trade and Industry established a “Tritium Water Task Force” to study 5 cases assuming geological injection, underground burial, and steam discharge. In June 2016, diluted discharge to the ocean is the cheapest (34) We compiled a report that can be processed in a short period of time (88 months) (100 million yen). In response to this report, the “Multi-nuclide Removal Equipment Treatment Water Treatment Subcommittee” (hereinafter referred to as the ALPS Subcommittee) established within the Ministry of Economy, Trade and Industry was released to the ocean in February. The report highlights the importance of measures to prevent reputational damage. Then, on April 13, 2021, the government convened the Ministerial Meeting on Countermeasures for Decommissioned, Contaminated and Treated Water, which decided on a government-wide policy on marine emissions.

However, the government and TEPCO are obsessed with ocean release under the condition of increasing polluted water volume. TEPCO released the “Assessment Report on the Impact of Ocean Release Radiation” on November 17, 2021, with little impact. show. At the same time, solicit the opinions of the general public. However, without considering the application comments, on December 21, three days after the application deadline, a permit application was submitted to the Nuclear Regulatory Authority for the installation of emissions equipment. Currently, the exam is in progress. A somewhat concrete plan is shown, but according to this, a tunnel will be excavated under the seabed by a drilling machine and released from the seabed 1 km offshore. The discharge of polluted water is less than 500 cubic meters per day, and the annual discharge is less than 22 trillion Becquerels. The expected issuance period is around 30 years.

TEPCO admitted that more than 70 percent of the treated water stored in the tanks was contaminated beyond regulatory standards. This is because ALPS processing is too rushed and the frequency of filter changes is reduced to adequately remove the radioactive material. In response, TEPCO said that when it is released, it will be sub-par again through ALPS.

The basic idea of ​​marine release is that it is safe because it is diluted with seawater. Simulations are calculations of uniform spread in the direction of flow based on past ocean current data. The evaluation period is only 2 years. The exposure dose assessment calculated external exposure from fishing activities and internal exposure from fish and shellfish ingestion and concluded that exposure doses were extremely low.

But it is undeniable that due to the topography of the seabed, radioactive substances released from the seabed 1 km offshore may accumulate. Heavy elements such as plutonium, for example, are likely to accumulate in relatively narrow regions. Regarding tritium, although the ALPS subcommittee acknowledged the existence of organically bound tritium (OBT), this assessment was not necessary. This is an extremely sloppy assessment. When OBT is absorbed by genes in the body, it emits beta rays and is converted into helium gas, which cleaves the genes. The energy of the simultaneously emitted beta rays can cause double-strand breaks, an undeniable risk of cells becoming cancerous.

Construction of the permafrost anti-seepage wall began in 2014 as a method to stop groundwater from flowing into the building, but this method has not yet been put into practical use and its effectiveness has been questioned from the outset. TEPCO later reopened and said it had the effect of suppressing groundwater, but the effect was limited. Taking this impractical approach is TEPCO’s remedy, with a focus on what can be installed with government support.

TEPCO expects the system to operate for a very loose period of about seven years. According to a report on October 28, 2021, the temperature of the temperature measuring tube temporarily reached 10°C in some areas of permafrost. After that, on November 18, the temperature rose to 13.4°C, so construction work to prevent groundwater inflow was carried out by driving in new sheet piles (from materials released by TEPCO HD on December 16). The location is on the mountain side of Unit 4. In addition, on January 18, 2022, the freezing pipe was damaged and the refrigerant (aqueous calcium chloride solution) flowing through leaked. What appeared to be a puddle of refrigerant was confirmed, and it was also confirmed that the water level in the tank delivering the refrigerant was low. The location is on the mountain side of Unit 2. Since the permafrost pipes themselves have been reported to be damaged in this way, it will be difficult to maintain the function of the permafrost impermeable wall in the future, and there is a risk that the production of polluted water will further increase. The cryotube is damaged.

According to TEPCO’s Radiation Impact Report, 64 types of radioactive substances release tens of thousands to trillions of becquerels each year. This is a verification test based assessment and the assessment period is only 2 years. The release of the contaminated water will last for 30 years, but it does not reveal how much radioactive material will be released during the entire period. If this becomes clear, the future of radioactive contamination of the marine environment will be visible. Radioactive contamination of the marine environment is unacceptable. A method other than release should be used.